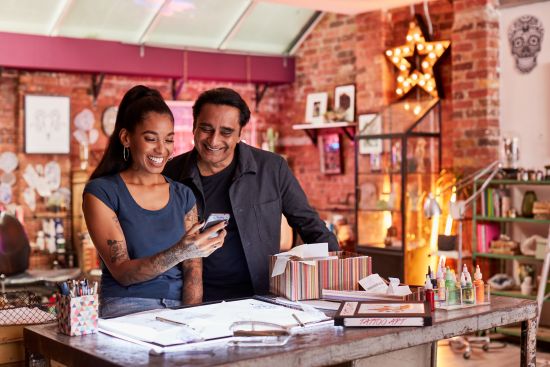 Intuit QuickBooks today announced the latest chapter in its 'Backing You' campaign. First launched in 2017, “Backing You' was created to celebrate and honour those who work for themselves. The latest campaign features Sanjeev Bhaskar OBE who coaches three real small businesses to show how QuickBooks’ smarter business tools can solve the day-to-day problems faced by small businesses.

The campaign includes three short films in which Bhaskar advises a tattooist, a decorator and a doggy daycare owner – all real small businesses and QuickBooks customers. Bhaskar sheds light on the common struggles faced by small business owners including managing payments, collecting receipts, calculating VAT and filing taxes. He then demonstrates the simplicity of using software to help owners save time and focus on the jobs they love.

Through the films, QuickBooks addresses the Government’s Making Tax Digital for VAT (MTD) legislation. Over one million small businesses will be required to submit tax digitally from April 2019, the biggest change to tax compliance in a generation. Many haven’t heard of the legislation or understand what it means for their business. The campaign raises awareness of MTD and demonstrates how QuickBooks will make MTD easy for small businesses and accountants.

Alicia Skubick, QuickBooks' UK marketing director said: “Our job at QuickBooks is to make managing finances easy so owners can get back to what’s important, running and growing their business. Making Tax Digital is a moment where owners will have to change how they prepare and file VAT, so we have used celebrity and levity to help make these changes easier to understand and navigate.”

QuickBooks data shows that small businesses and accountants start to review their business finances and tax for the new year starting on Boxing Day. As a result, the first film launches on 26th December during the 21.30 break of Channel 4’s Big Fat Quiz of the Year. The campaign is complemented by Radio, Out of Home and Digital Media and was built in partnership with Intuit QuickBooks’ agency of record, TBWA\London. It is part of the global ‘Backing You’ campaign, however the UK has market specific creative and addresses the local challenge of Making Tax Digital.