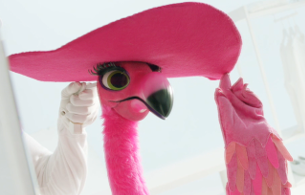 intu, the owner of some of the UK’s largest and most popular shopping centres, is launching a new TV campaign under a new brand platform this Christmas: “Your kind of shopping”.

The Christmas campaign, created by Now, features beautifully and painstakingly crafted bird puppets inspired by stage shows such as War Horse and The Lion King to personify seven different types of shoppers and shopper behaviours - from the ‘Last Minute Panic Shopper’ in a flap to the ‘Wise Shopper’. The message of the campaign is that, no matter what type of shopper you are, intu understands you and can make your Christmas shopping experience better.

The puppeteers in the film include specialist performers from Henson and War Horse and the puppets, film and photography were produced by Blinkink and directed by Joseph Mann, who together have also helped create loveable characters for the likes of Cravendale and Churchill.

Having the puppeteers as part of the performance, a technique traditionally reserved for the stage, allows the film to feel more like a piece of theatre.

The integrated campaign launches on TV on Monday, November 7th and will also run across digital, social, OOH and in-centre media.

Now, which was appointed to the business in January this year, also worked alongside media agency Blue 449 for the campaign.

Remco Graham, Executive Creative Director at Now, said: "In a world of   elves, bright lights, jingle bells and sad songs, we knew we had to do something a little different to ensure intu stood out at Christmas.”

Roger Binks, Customer Experience Director at intu, said: “The intu brand is all about curating the very best customer experience. To support this, we wanted to create a consumer proposition that resonated with our audience and that could act as a platform for the next phase of our brand development.  Our “your kind of shopping” proposition using the seven shopper groups has been crafted to drive an emotional connection with our guests, allowing them to see themselves in our advertising and to demonstrate that we understand them.”

Joseph Mann said: “Keeping the puppeteers in shot was always our plan but it came with some challenges. The puppeteers are used to working in front of a screen so they can see what they’re doing. Making them part of the performance meant this wasn’t possible. They had to almost be an extension of the bird and therefore act alongside them, looking at them rather than straight on. As you can imagine, this required a lot of tests, rehearsals and choreography and with only four shoot days to work with it was a real challenge, but we are very pleased with the result.”