Introducing Free The Bid: A Historical Pledge to Give Female Directors a Voice In Advertising 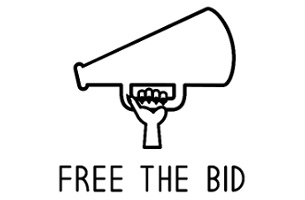 Announced today, Free The Bid is an Initiative guaranteeing women directors an equal opportunity to bid on commercial jobs in the advertising world.

Alma Har’el, director of the award-winning documentaries Bombay Beach and LoveTrue and Founder of Free the Bid, was inspired to ignite change when giving a recent interview toMashable about the low number of female-helmed commercials. Less than 7% of directors are women, and less than 3% of creative directors at ad agencies are women. These numbers are hard to swallow for 50% of the world’s population, especially when the Harvard business review and many publications suggest that women are the #1 consumer group that makes approximately 85% of product purchase decisions.

PJ Pereira, CCO and co-founder of Pereira & O’Dell, has worked with Har’el when she directed two national campaigns for Airbnb. Pereira reached out to Har’el after her Mashable interview to express how much her words inspired him, and tell her his declaration to pursue a mandatory bid from a woman director on every pitch at his agency as a result of reading the interview.

Pereira says, “It’s a simple idea that would force the entire advertising ecosystem be more welcoming to women directors. The whole corporate world needs to fix its diversity issue. Because it's right but also because it's smart. Creativity is usually explained as "thinking outside the box". It is easier to achieve creativity through diversity. Embracing multiple genders, races, sexual orientations, nationalities… are all important because they help make companies and brands more creative, empathetic and representative of their customers and of society itself.”

Har’el was moved by the idea and decided to inspire ad agencies, production companies and brands to take the pledge for a woman director bid on every commercial. Har'el named the initiative #FreeTheBid and it launches today with an extensive website, and the backing of prominent ad agencies and industry figures at the epicenter of the gender diversity discussion, including Cindy Gallop.

Har’el says, “I’m starting #FreeTheBid so the ad industry can come together and take an affirmative step towards addressing what stops advertisers from working with women directors. I couldn’t have been an independent filmmaker and make the films I love if I didn’t make a living directing commercials. I want to make sure other women filmmakers have the same chance to sustain themselves while being creative and shaping the way women are represented in advertising. We have to start the change right now in the only practical and effective way – let women be heard.”

But what seems to be a real moment in the history of the advertising world is the commitment that brands are taking to actively increase the opportunities for women directors. Microsoft’s director of global advertising, Kathleen Hall and the world’s online marketplace eBay had already taken the pledge to #FreeTheBid.

eBay’s Chief Marketing Officer of North America, Suzy Deering says, "The pledge to extend to women meaningful opportunities in our business is a simple and powerful idea. In the advertising industry, addressing diversity is critical to continued growth and success, and at eBay we’re committed to aligning all aspects of our work with our inclusion initiatives.”

Rodolfo Echeverria, Coca-Cola’s Vice President Creative of connections says, “Loved the idea and hope every agency in the world makes the pledge so we can solve this problem quickly.”

On the website’s main page you can also see quotes from supporters such as renowned feminist and advertising consultant Cindy Gallop, alongside Spike Jonze who is famous for his astounding commercials as much as his award-winning films.

Jonze says, “I find #FreeTheBid so inspiring. It seems like a no brainer. Of course we should be getting more women filmmakers to bid on jobs. As with all great ideas, it’s such a simple one and the end result is going to be getting more diverse voices into the conversation and therefore more diverse voices into the work which makes the work better."

Har’el who was always a fan of Spike Jonze’s ability to keep his own voice as a filmmaker while directing unforgettable commercials, reached out to him as a male example to what inspired her to direct commercials herself. After long conversations with women directors and leading ad agencies Har’el gathered what she believes are easy solutions to some of the problems that keep agencies from finding the right women for the job.

The #FreeTheBid website will feature over 130 signed women directors from all leading production companies including links to their reels and producers, it will curate new unsigned directors on a monthly basis and will keep track of the work that’s being done by women as a result of the initiative. Organized screenings for ad agencies who want to discover female directors and a system that will allow to track some of the numbers are also in the works, as well as events to showcase the work created from Free The Bid’s success stories.

The database is a critical resource because it will help the agencies that pledged to keep their commitment. A few years ago a similar initiative was launched at the Swedish advertising market called “One Out Of Three”. It was a recommendation in a regulatory document and although it launched an important conversation, it didn’t manage to create a profound impact because agencies were struggling to find women directors. This resource is just a facilitator, though. The real change will happen inside of the agencies.

“There are incredibly capable and talented women on the site, but we all know that without the commitment from ad agencies and brands, this would have been just another database of women who deserve a chance. My wish is that the agencies will be able to report positive results and see a real change in numbers a year from now,” said Har’el.

Susan Credle, Global CCO of FCB, who was one of the first to join the Initiative and helped Har’el reach some of the more prominent agencies says, “To find great female directors, first, you have to look for them. It's that simple. #FreeTheBid reminds us all to open our eyes to the less obvious but perhaps even more brilliant choice.”

Cindy Gallop, sums it up saying, “I am absolutely thrilled with this initiative and could not support it more. It appalls me how much our industry, clients and brands are missing out on a huge, untapped, completely wasted pool of female directorial talent, not to mention female talent across all stages of production. A huge amount of money (from creating more brand success for our predominantly female-targeting clients) and awards (for truly innovative, disruptive work) are being left on the table.