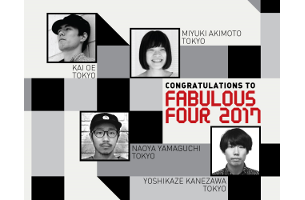 The scripts that received the highest scores are ‘Life Style’, written by Kai Oe; ‘Tradition’, written by Miyuki Akimoto; ‘The Dolls With Attitude’, written by Naoya Yamaguchi; and ‘Floating Father’, written by Yoshikaze Kanezawa.

“We read some really funny and inspiring scripts, but we were intrigued by these four scripts in particular. I’m curious to see how Kai, Miyuki, Naoya and Yoshikaze bring their stories to life over the next few weeks,” says Esse, Jury President of Film Craft Lotus and New Director Lotus at ADFEST 2017.

Every year, ADFEST invites new directors and assistant directors to write a five-minute short film script inspired by the festival’s theme, which this year is “20 Years of Diversity”.

Erika Konno, Director at TYO CampKAZ, won the Fabulous Four Commendation Certificate for her short film, ‘Brushing Up’, at ADFEST 2016. She says: “Winning the Commendation was a big help for my career. I have been able to direct other projects with my own style since I was given this award. Also, winning the Commendation has led me to meeting new people.  I am really grateful for this opportunity.

“It was very challenging shooting my short film ‘Brushing Up’ in a few weeks, but it has improved my skills as a director. During filming we had many shots to cover, so it was a matter of time and physical strength. It surely was a tough experience, but I learnt about how to bring the quality of film higher with such limited time.  This is really helping me a lot today for other projects.”

Vinit Suraphongchai, Chairman of ADFEST, says: “ADFEST has introduced so many programs and workshops over the past 20 years, but Fabulous Four remains one of the initiatives that we’re most proud of. It gives emerging directors the chance to showcase their talents to producers all over the world, which is the kind of experience that money can’t buy.”