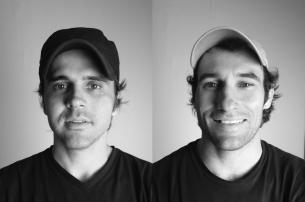 Comprised of Tomas Salles and Mateus Araujo, TOMAT brings a unique perspective to Interstate. With their combination of outrageous scenarios and visually compelling graphics, their sense of style and humour is inimitable. Equally adroit in live-action, cinematography, photography and CG, the duo is primed to succeed within Interstate’s culture of creativity and nimble craftsmanship.

“One of the things that draws us to TOMAT’s work is their tonality, which I think is shared with our other directors at Interstate. Though that dark, comedic thought process really is unique among the group,” says Interstate Partner/EP Danny Rosenbloom. “We’re thrilled.”

“TOMAT brings a subtle, intelligent and visually-driven humor to commercials and branded content that we know agencies will respond to in the US,” adds Partner/Director Laurent Barthelemy.

Salles and Araujo formed TOMAT in 2011 while working as visual effects artists in Brazil. That same year, as directors, they went on to win a Bronze Lion at Cannes for their “Cat-Toast” spot for energy drink Flying Horse, as well as Shots Magazine’s prestigious Young Director Award. They have since collaborated with a number of international brands, including Budweiser, Coca-Cola, Renault, and Bayer.

Salles comes from a 3D background, having worked for eight years in New York for various companies, including Psyop/MassMarket, Buck, Artjail and The Mill. His short, “Equilibrio,” which he shot on 35mm film while attending NYU’s Masters program, went on to win the Create Awards, and Student Filmmaker Magazine’s Summer Shorts Awards, and was showcased in STASH Magazine, and SIGGRAPH’s prestigious Electronic Theater.

Araujo’s career began as a compositing artist and post production supervisor. He got into filmmaking as a way to expand his motion graphics and animation talents. While earning his Master’s degree in Design and Technology from Parsons University in New York, he discovered that he loved being behind the camera as much as the computer. From there, he began directing music videos and freelancing for a range entertainment companies, including FDG Interspectacular, BET, USA Network, and Comedy Central.

“We’re fans of Monty Python-type of comedy,” says Araujo. “It’s subtle, and not too wacky. We love using special effects to enhance the comedic aspect of the story. That’s where we differentiate ourselves from other directors. We’re able to mix those elements very well.”

“If you’re going to work with a production company, it has to be one with people you trust, who share similar interests and values,” concludes Salles. “You need to have a good relationship in order for your work to shine. Interstate already has a wonderful roster, and I think we can add to their offering with our unique style of photographic and emotional work.”