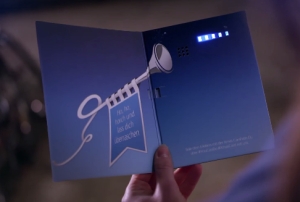 Interone and O2 are launching the world’s first greetings card that telephones. This innovation is now set to provide a special digital message – initially for the German market. Right in time for Christmas, the card presents a way of sending individual festive greetings.

The world’s first greetings card that can telephone has been developed by the agency Interone and is such a unique feature on the telecommunications market that it has been filed as a patent.

Thanks to an integrated SIM card, the Xmas card from O2 works like a mobile phone. As soon as the card is opened, it calls a previously stored number and establishes a connection. Interone is thus demonstrating once again what is required to open up additional and new markets for its clients: technological innovations combined with a good story.

The premiere of the card is linked to a social media campaign. In keeping with the festive spirit, the community is being asked to apply by submitting a personal story to the campaign microsite. Who is especially important to you and why should this person in particular receive the card? The most moving or original suggestions will win a prize. An Xmas card from O2 will then be sent out in the winner’s name. As soon as the recipient opens the card, a telephone connection will be set up to the sender’s mobile phone. This means that the sender will speak into their phone – and their voice will emerge live from the amazed recipient’s greetings card. And vice versa.

A promotional film explains the principle of the card and can now be viewed, among other sites, on the YouCanDo page.