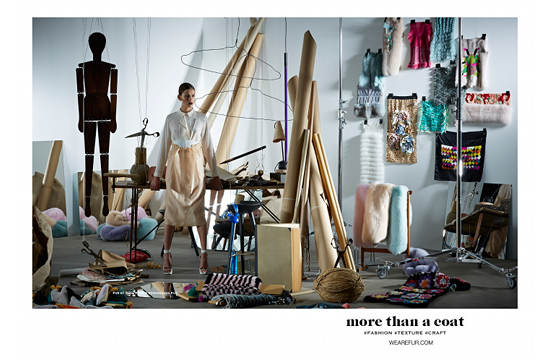 The International Fur Trade Federation (IFTF) has developed a pan-European advertising campaign to promote fur in a drive to communicate its versatility, modernity and relevance to today’s consumers.

The campaign, which leads with the strapline ‘more than a coat’, promotes fur’s fashion and, perhaps more surprisingly, its lifestyle and interiors credentials as well as the heritage and craft that characterise the industry.

A suite of edgy ad treatments has been created and will appear for the first time in the October edition of UK Vogue magazine, on sale from the second week of September as well as European editions of the magazine (France, Germany, Italy and Spain).  Ads will also run in Tatler, Vanity Fair (UK, Italy and France), style.com, World of Interiors, House & Garden and Wallpaper* throughout October and November.

In a daring departure from its traditional approach, the IFTF decided neither to feature a model wearing a fur garment nor to show any branded fur items. Instead, the ads show a model who adopts a range of mannequin poses that are almost doll-like in their immobility. She appears in a stylised workshop setting surrounded by a selection of colourful furs that showcase a range of techniques that are growing its versatility and broadening its appeal.  The workshop shows items found in a typical fashion atelier such as giant cutting boards, scissors, skeins of wool, hangers and a tailor’s dummy. These nod to the tradition and craft that remain an important part of fur’s story as well as the centuries’ worth of heritage that a beautifully made fur item represents. 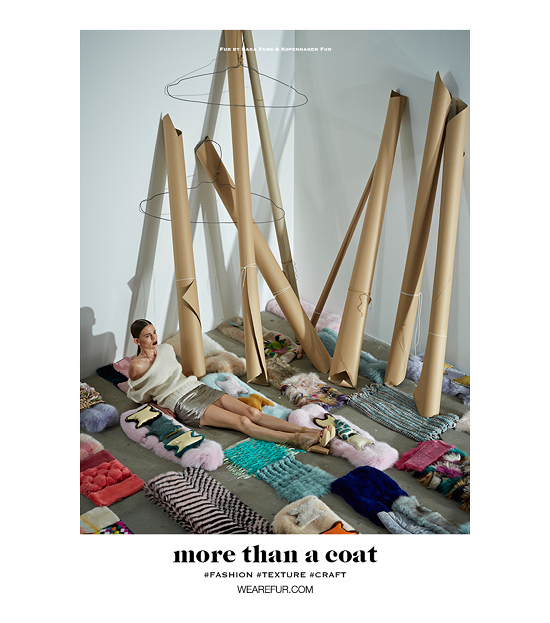 The campaign was directed by Christian Helmer, a Danish designer who has been working with fur for a number of years.  He comments:  “These ads create a fur fantasy world with oversized objects, inhabited by a girl with many pretty things to play with.  The creative concept I worked on bridges the worlds of fashion, lifestyle and interiors as well as the notions of modernity and tradition that fur represents so wonderfully.

Mark Oaten, CEO, International Fur Trade Federation said: “Traditional ad campaigns for fur usually feature a beautiful model wearing an equally beautiful, branded fur coat. While we’ve been happy to take that approach in the past, there’s so much more to say about fur these days.

“The pace of innovation in the industry is frankly staggering and we want to challenge people’s pre-conceptions about what fur is and how it can be used.  It can come in every colour under the sun and techniques that mix it with leather, silk and other fabrics mean it can be worn in ever season.  Then there are new and exciting uses for fur, increasingly in men’s fashion but also in the world of interiors.

“Our campaign works hard to communicate the fresh, modern face of fur while still acknowledging how important craft skills are in pushing the boundaries and re-inventing this most versatile of materials that has been in use since the dawn of mankind. So our strapline, ‘more than a coat’ references fur’s wide range of uses and the centuries of know-how and craftsmanship that consumers get when they buy fur.

“We understand too that despite our work to demonstrate that today fur is a responsible choice, there is still much work to be done. We want our campaign to encourage an open and informed conversation about fur, so have included a range of hashtags for people to use on Twitter, Facebook and other social media platforms.”