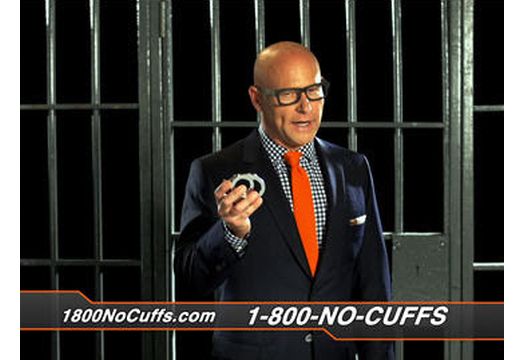 Legal advertising leader InterMedia Advertising has linked up with 1-800-NO-CUFFS as the brand’s new agency of record. InterMedia will be launching a $2 million radio and TV campaign in California, promoting the DUI legal defense firm as “Your Get Out of Jail Card.”

Founded by Darren T. Kavinoky, 1-800-NO-CUFFS is looking to build awareness and recognition beyond its California base.  The Kavinoky Law firm’s goal is to become the nation’s leading DUI defense organization. The Kavinoky Law Firm is already one of largest criminal defense law firms in the state of California, with locations from San Diego to San Francisco.

Kavinoky regularly appears as an analyst on dozens of nationally syndicated shows including The Today Show, Entertainment Tonight, The Insider, Good Morning America, The Early Show, Dr. Phil, various shows on CNN and HLN, Fox & Friends, Inside Edition and many other national and local broadcasts, including his show, Deadly Sins on Investigation Discovery. Kavinoky has been honored as a SuperLawyer, ranked as one of Top 100 Trial Lawyers in California each year since 2007; and he was featured on the cover of Speaker magazine in May 2014

According to Darren Kavinoky, who has authored or contributed to several legal textbooks concerning DUI defense, a DUI charge does not necessarily mean a conviction. Many drivers facing a DUI charge believe that an arrest is synonymous with a conviction, but Kavinoky’s firm has proven that this dreaded outcome is often not the case.

1-800-NO-CUFFS has helped clients fight and win driving-under-the-influences cases both in court and at DMV hearings. The company has experienced DUl defense attorneys in its offices throughout the state.

“We have a wealth of legal experience in multiple legal disciplines ourselves,” notes Robert Yallen, CEO of the InterMedia Group of Companies and an attorney himself. “Over the past 20 years InterMedia has been at the forefront of marketing innovation helping attorneys and law firms build their brands, reputations and case portfolios with creative, cost-effective media campaigns. We are thrilled to be bringing our expertise to the table to help Darren grow consumer recognition for 1-800-NO-CUFFS. We are most excited about Darren’s unique legal brand—and are very excited to leverage Darren’s celebrity and high energy.

“Darren is a great personality. He’s already established himself as a believable and trust worthy leader in his field as evidenced by the number of news media who seek him out as a legal authority,” added Yallen.  “He has a great brand image which we will be capitalizing on with this campaign.”

An additional goal of the campaign is to provide potential clients with the 1-800-NO-CUFFS highly-relevant and memorable toll-free telephone number graphically positioned via a mnemonic live action-CG, where Kavinoky throws handcuffs to the camera and they turn into the vanity 800 number on the firm’s Get Out of Jail Card.