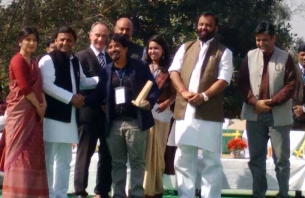 Being chosen as amongst the best from over 7,000 entries across the world, Pradeep Debnath, Creative Director, Interbrand India was recently awarded as the finalist in the TDV Mera Agra design contest.

TDV Mera Agra contest was the first design competition launched by "The Design Village" in collaboration with Uttar Pradesh Government, Department of Tourism and the Dutch Embassy. The goal of the competition was to call for thematic designs which not only explain Agra as ‘City of Taj’ but also bring other facets of Agra to their best use for representation.

The contest’s mission was to acknowledge and reward the design which had the potential to express the City of Agra in the most magnetic way. The design needed to brush off the bewildered image of Agra which seems to be lost in the transition. It needed to celebrate Agra as a ‘world destination’ which is green, rich with handicrafts, equipped with world heritage sites, great culinary and wonders.

The brief was quite simple: The city of AGRA attracts more than 2.5 million domestic and foreign visitors annually. To enhance the experience of the visitors and for creating a sense of belonging amongst citizens of India – the Uttar Pradesh government – is undertaking a project to create an identity for this vibrant city. To fuel this intention, MerAgra was conceptualized with an intent to welcome varied views of the city of Agra.

After few rounds of judging and scrutiny, Pradeep’s design was selected as one amongst the best three designs. The slogan of his poster was- ‘Passion with Purpose’. Talking about his logo, he explained, “In creating the identity, I built on the same passion which built Agra to make it more purposeful. ‘MerAgra’ thus stood for finding opportunities to make passion purposeful. The identity, based on a heart created with the letters ‘M’ and ‘A’ not only taps into the passion of the people, but also creates a distinctive graphic language that can spread across the environment, digital and even mobile applications.” 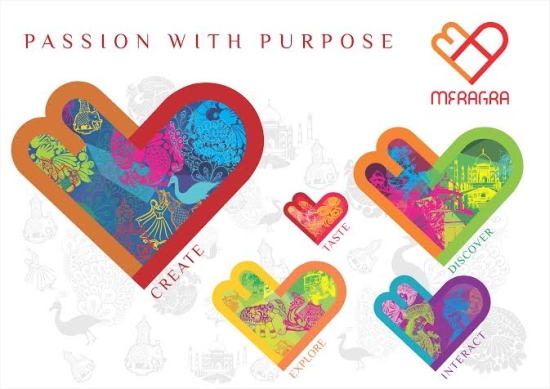 Further explaining the concept of his poster, Pradeep said, “My design for ‘MerAgra’ attempts to create a memorable brand for Agra, as the first step in rejuvenating the glory of the city. The need to create a memorable and recognizable identity that people across all demographics could relate to, was the primary task. To do this, deep diving into the city’s rich cultural past seemed apt. Agra was built centuries ago around one powerful emotion – Passion. Whether it was the monuments, craft, recipes or more, passion is what went into making them. The outcome was magnificent. This outcome was the ground for all the design elements used in the poster.”

Commenting upon the win, Ashish Mishra, Managing Director, Interbrand India said “Having established Interbrand’s offering in India on the strategy & analytics side during our first two years, we have now set an agenda for highlighting our equally benchmark design proficiency. Due to our substantial global reputation around Brand Strategy and Valuation, our design credentials sometimes tend to go unnoticed. That’s something we plan to correct in the Indian market this year and Pradeep’s recognition is a good first step”