Inspirational Women and Men Come Together for First Ever European S.H.E. Summit 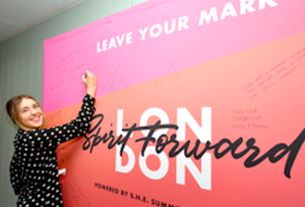 On the lead up to International Women’s Day, a host of inspirational men and women, from across society, culture and business, came together at Spirit Forward LONDON – the first ever European S.H.E. Summit event – to champion the need for change to create a more diverse and inclusive community and workforce.

The event focused on celebrating and accelerating equality for all, with pertinent issues and highlights.

TV presenter and diversity campaigner, June Sarpong delivered a talk championing the case for the social, moral and economic benefits of diversity and said: “Cultural change of any kind is difficult, it’s uncomfortable, but the rewards are exponential. The kind of society we will create is beyond our wildest dreams. That’s the kind of legacy we want to leave behind.”

Speaking as part of a panel on how men can help end inequality, Laura Haynes, Chair Emeritus of UN Women said: “As women we can do what we want in the workplace, but if the system is stacked against you it is much harder to make change happen.”

Haynes works with organisations to encourage them to consider their values, define their identity and use their influence for good. When asked her thoughts on the next most immediate issue of our time, Haynes commented: “This is not yesterday’s topic, it is tomorrow’s topic. My biggest concern is that we move on to something else, there’s still a lot to do.”

Patrick Harrison, Executive Director, English National Ballet and Daniel Edmund, Co-Founder, Milk For Tea joined Haynes on the panel and encouraged people of all genders to use their positions of privilege to remove social barriers and challenge toxic masculinity and traditional gender stereotypes.

Mary Burke, Senior Executive, British Film Institute joined a panel discussing representations of women in film and TV. On recalling one of her first jobs, Burke commented: “I worked in a company of men so felt I had to hide my emotions and experiences.” Despite women accounting for 50% of cinema-goers, they count for only 4% of directors and 18% of producers according to a 2018 study by the Center for the Study of Women in Television and Film. Burke later hypothesized: “This year I’m very hopeful that we will see real change in the industry for women.”

The Faces of Change panel, led by Gina Martin, which explored the people making a difference, re-defining what it takes to lead and contributing to contemporary change. Also on the panel were diversity campaigner and founder of multi-award-winning wedding blog Nu Bride, Nova Reid; CEO and Founder of Bloody Good Period, Gabby Edlin; and Head of Advocacy Bacardi Brown-Forman, Shervene Shahbazkhani.

The one-day event was anchored in the theme: You Don’t Need to be in Charge to Lead, centering on the belief that the first step in being a change-maker is to acknowledge that you already are.

Spirit Forward LONDON was a not for profit event and all ticket sale proceeds went to charity partner, Dress for Success Greater London, a registered charity that empowers women into the workplace from positions of disadvantage. Dress for Success provides free professional clothing and styling, interview coaching and ongoing support.