Inside the Jury Zoom: Middle East and Africa Flexes Its Creativity 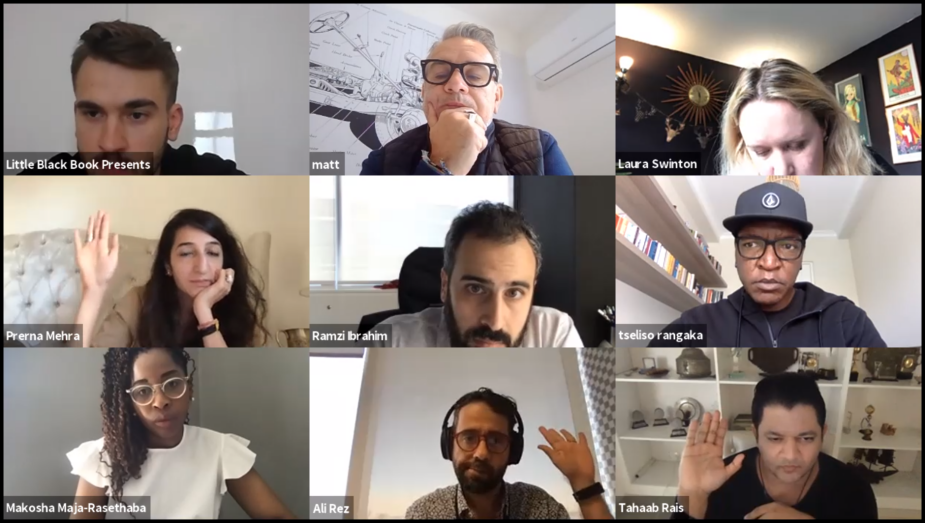 Go big or go home – because creative in the Middle East and Africa isn’t playing about. The third heat in the Immortal Awards 2020 regional round saw judges tackle possibly the meatiest, strongest and funniest shortlist of the competition so far.

“The best juries are the ones in which you get to learn about different cultures, and the Immortals jury was exactly that. I found the various conversations about local nuances, and what was effective on a ground level, very, very interesting,” says Impact BBDO’s Ali Rez on the experience.

Even a glance at the shortlist will show that the Middle East vastly outperformed Africa – a topic that was addressed and interrogated in the jury room. Nonetheless, for Tsesliso Rangaka, ECD at FCB Joburg, what can be drawn from the work is the incredibly high levels of craft in markets like South Africa, and an insight that, collectively, the local industry needs to stop trying to make their cases mesh with global expectations – it needs make a better collective job of championing and communicating the local context.

That’s something that Tahaab Rais at FP7 McCann noted too. He “was also interested to note the theme around new-age, brave Middle Eastern and African creativity; it was interesting to observe work from across MEA and see work from the ME scoring higher than Africa. I’m a fan of creativity from the continent of Africa and I did feel a couple of cases could’ve made the cut. Hence, it’s so important for case studies to explain the cultural context and why the case mattered in that market and to really build that empathy from foreign jurors who don’t know your campaign or region all that well. I was also interested to see how humour performs and how, when it is very, very local, humourous work tends to struggle to appeal to a more international panel.”

Some work floated to the top immediately, with Mastercard’s ‘Astronomical Sale’ – an enormously impactful activation triggered by the similarity of the solar eclipse to the Mastercard logo – impressed the jury universally. In fact several jurors also working within the UAE market confessed that they had experienced quite a bit of jealousy when the creative launched late in 2019.

“I cannot get over that! Love it!,” enthuses Prerna. “It’s a beautiful piece of work which is integrated in its truest sense. Brilliant mix of insight, design, idea, digital and product/brand integration, use of topicality, brand relevance, hijacking the global event. I can go on and on. One of the ideas the competition often looks at and says wish we could have done this, but no they couldn’t because it was so intrinsic to the brand. Perfect.”

The ever-meticulous jury had even put some of the campaigns to the test, with some even going off to test out the digital campaigns, like the Snicker’s data-driven promotion Hunger Insurance.

As well as big, innovative brand campaigns, the region also had some powerful, social good, purpose-driven work on offer too. With pieces like the An Nahar Newspaper’s ‘New National Anthem’ that made a big statement about women, the astounding Blood Unity drive which turned a traditional blood-letting ceremony into a blood donation drive, and the more tender Alzheimer’s Association Lebanon Zikrayat Playlist, it was clear that there’s a huge role for creativity in addressing the challenges in the region. And the jurors brought their personal experience of these issues to the fore during judging.

“There were a few pieces that left an impact on me. Some didn’t make it through to the end, such as the 16 Days of Activism, and some that did left different marks,” says Ramzi. “As a Lebanese, the past few years (much longer actually) haven’t been good to us, and when we thought that it couldn’t get worse, 2020 happens. In a way, I think we jinxed it! So, the stories coming out of Lebanon that are all about change, and the suffocating need for it, left a personal mark on me.”

It wasn’t all serious work addressing serious issues. One thing that marked the 30-strong shortlist out was the prevalence of comedy on the reel, a welcome change of mood and some real laugh out loud moments. In the end, despite the positive sentiment among the jury towards these funny creative films, only one – the wonderfully surreal Shelflife - Nike x Stussy film from Massif Media in South Africa  – was deemed to be of a standard to compete at the global finals. But for anyone wanting to delve into the comedy coming out of the region, particularly Egypt, campaigns like ‘Don't Go to City Centre! ‘ and Etisalat Misr’s ‘My Family Is Better Than Yours’ were praised for their sharp writing and cultural insight.

During the session, some of the most intense and crunchy discussion concerned the work that straddled the threshold.

“It’s great to see so much well-crafted work coming out from the region. The finalists were the great ideas that brought the most consensus, but there were other beautiful campaigns that each one of us spoke out for as well,” says Ramzi Ibrahim. “The work that prolonged the discussion were the ones that either made their brands really stand out, or the ones that had great impact and drive for change in the different countries that urgently need it.”

The benefit of the regional jury arose as it came time to discuss the local impact of work. Two highly-regarded pieces from South Africa that didn’t quite make it to the final round involved violence against women and the South African jurors were able to explain the extent of the problem and also the scale of the discussion triggered by pieces like Hype Magazine’s #BlameNoMore and 1st For Women’s 16 Days of Activism. And in Dubai, another project that didn’t quite make the final cut ‘The World’s Tallest Donation Box’ from MullenLowe received sincere praise from the non-MullenLowe jurors for being a project that had received extensive and inescapable news coverage.

For Ali Rez, regional ECD at Impact BBDO, the work on display reflected a region that has come into its own creatively, and has become expert at combining big ideas with smart local nuance. “The best part about the work from MEA is that most of it taps into very awesome topical and relevant cultural insights. One also gets to see some very bold work in a rapidly developing region: work which pushes traditional boundaries, and has tremendous positive impact on culture.”

According to Prerna, the work that went through reflects the growing creative courage in the region. “What it says is the fact that this region is constantly producing real and impactful work which is making a real difference in the world,” she says. “It speaks volumes about how the work is getting stronger and brands bolder. How the creatives are fearless and wanting to make a real difference.”

But that’s not to say that there isn’t still work to be done and progress to be made. While delighted with the work that made the cut – and some of the work that did not – taken as a whole the submitted and shortlisted work still lacked variety.

“The work is limited. The scale is limited. The impact isn’t as big as it should be. And that’s because of the pre-COVID 19 economic crisis that was followed by the COVID-19 crisis. Most marketers have been focused on short-term wins and achieving targets (understandably so, to keep their jobs) versus changing culture or making lives better or long-term brand building wins,” says Tahaab. “So, we didn’t see the variety and quality we’d expect. But, that allowed a few real gems shine through.”

Check out all the finalists here.