At the end of 2010 The Works were commissioned to re-record Queens Flashs Theme for RKCRY&Rs latest Innocent Smoothies... 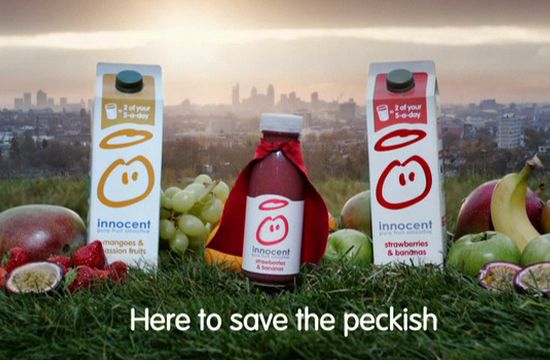 At the end of 2010 The Works were commissioned to re-record Queen’s “Flash’s Theme” for RKCRY&R’s latest Innocent Smoothies spot featuring an Innocent smoothie bottle in a cape jetting about at high speed (on deliberately obvious wires) to 'Save the Peckish' with its dollops of fruity goodness.
We worked closely with Dan Neale (Head of Music at RKCRY&R) to recreate the original sound of the Queen recording. “We even managed to track down Reinhold Mack, producer of the original recording featured in the Flash Gordon movie and have a telephone conversation with him to find out exactly what went on originally” explains producer Nick Payne. “After gathering as much information as possible we set about collecting old microphones, sourcing guitar amps and chose a studio with a similarly treated and sized live room to that of the original recording venue in which to do the new recording”.

Two days were spent with engineer Niall Arcott recording and mixing the new version of the song that claims “Fruit Aha, Saviour of the Universe”. The new recording which also features drummer Patrick Garvey, guitarist Adrian Curtis and pianist Angus Havers with vocals by Keith Murrell and Chris Madin can be heard in it’s entirety (yes we did a full length version too!) on Innocent’s new Youtube channel.

Since it’s release at the beginning of 2011 the spot (and it’s music) have been very well received claims Nick Payne. It’s been given an “Ad of the Week” from The Grocer, JWT’s Russell Ramsey said in his Private View section of Campaign “I think it will have big standout, especially because of the music and Brian Blessed's booming voice” and there is even a facebook page dedicated entirely to “The Innocent Smoothie Advert” where members of the public have been commenting on the success of the work.
view more - Creative