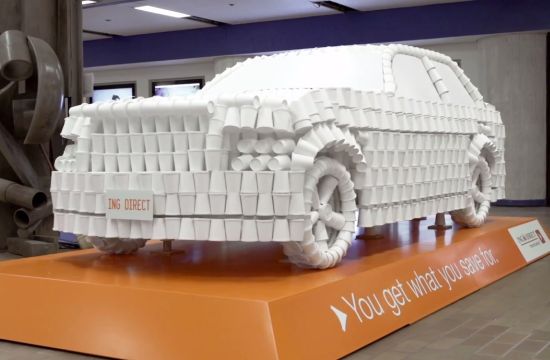 A picture is worth a thousand words, but ING DIRECT took that concept even further with their new campaign. They used thousands of coffee cups to demonstrate to the locals of the Canadian city of Edmonton that cutting back on daily indulgences can help you achieve larger savings goals. To best illustrate that “you get what you save for”, ING DIRECT built a life-size car showing what spending on a popular morning  staple, such as coffee, can add up to over time.

The installation was a joint effort between ING DIRECT and several Toronto based agencies. The creative idea was developed by john st. with media buying handled by Initiative. Fourth Wall Media (the experiential marketing division of PATTISON Outdoor Advertising) handled production of the car.

The installation will live in the bustling Churchill Subway Station in Edmonton for nearly four weeks from August 12 until September 8. Commuters have been challenged to guess the amount of cups used to create the showpiece and submit their answers through Twitter and Instagram using the hashtag #getwhatyousavefor for the chance to win $5,000.

Following a month of research and development, the car took shape before commuters’ eyes over three labour-intensive days. The unique installation is accompanied by a station domination that will drive passers-by to the creative centrepiece with stair raisers, posters, floor vinyl and wall murals. Transit and bus shelter ads will also appear nationwide.

All coffee cups used were made from post-consumer recycled material and unused cups from the installation planning will be donated to The Calgary Drop-In & Rehab Centre following the campaign.