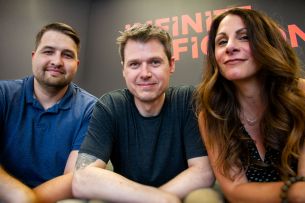 Infinite Fiction, the rapidly growing creative studio, recently boosted their roster with the addition of seasoned Lead Designer Cody Clack and Executive Producer Amy Aitken. The two join Lead Artist Jason Vigue and a team of high-end designers, artists, modelers and compositors who are quickly making a name for themselves in the Southwest. Their work can be viewed at www.infinitefiction.tv or at www.republiceditorial.com.

Known for his collaborative leadership approach, Clack gained his expertise in the industry working at shops like Post Op Editorial and Man On Fire. In 2017 he teamed up with editor Adam Henderson to win 2017’s Adobe’s prestigious “Make the Cut’ competition, which launched Imagine Dragon’s highly acclaimed ‘Believer’ music video. “Cody is a great designer first,” says Vigue, “but it’s his amazing skill set that allows him to elevate whatever challenge we get handed quickly, with a fresh modern tone. He brings an infectiously novel attitude that perfectly complements all the different personalities on our team.”

“I couldn’t be more excited to be joining Infinite Fiction right now,” says Clack. “In just two years they’ve quickly developed a distinguished reputation as an innovative and creative studio. To jump into such a supported, robust infrastructure presents an artist like me with an amazing palette. I’m excited to be working with Jason, Amy and the team to take our brand to the next level.”

With over twenty years of post-production know-how under her belt, Aitken brings a strong combination of sales, marketing and management experience to Infinite Fiction (www.infinitefiction.tv). A career that began on the West Coast at shops like The Finish Line and Mad River Post eventually found Aitken returning to her Texas roots. After a stint at Dallas’ Post Asylum, she was brought on at Infinite Fiction’s sister company, Republic Editorial, as senior producer, before taking on her most recent post as EP for Rising Fall.

“I’m so excited to be back working with the management team of Republic Editorial on the Infinite Fiction brand,” says Aitken. “They’ve always championed the importance of a strong design and visual effects department in support of their traditional editorial work, so launching a studio like Infinite Fiction that could tackle it’s own clientele was the next logical step.”

Aitken’s previous experience with Republic Editorial allowed her to seamlessly begin collaborating with a welcoming and familiar client base that she’s looking to build upon. “I’m eager to continue Infinite Fiction’s growth, and love the energy and excitement Cody and Jason bring to their projects,” she adds. “Both have the perfect mix of skill, creativity and personality, and they complement each other extremely well – they’re the perfect leaders to build a shop around.”

In her new role, Aitken will focus on developing Infinite Fiction’s sales and marketing strategy, growing its already stout client roster and further developing the team and its capabilities. The studio has already tackled projects for Samsung, McDonald’s, Universal Studios, Dairy Queen, SMU and Pizza Hut, and has new projects for AT&T, Audi and Capital One in their pipeline.

“We’re very excited about the crew we’ve got at the helm of Infinite Fiction,” says Keith James, Infinite Fiction and Republic Editorial partner. “The creativity and the communication amongst the team flows like clockwork. I know that doesn’t’ make any sense from a metaphor standpoint, but give that to them as a copy point, and our team will make it look like the Mona Lisa. That’s just how good they are.”