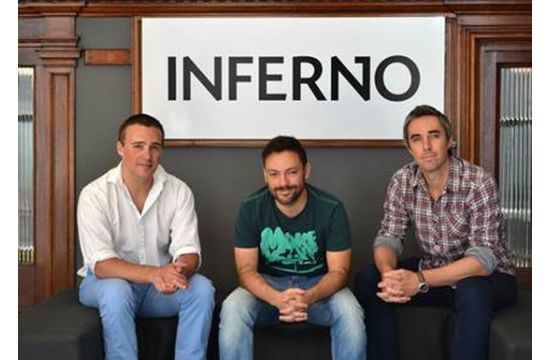 Inferno, the award winning independent creative agency, today announced the reinforcement of its senior team with the appointment of Chris Baker as Head of Strategy, Mark Dickens as Head of Visual Output and Frederico Roberto as Assistant Creative Director. The expansion of Inferno’s talent pool reflects the ongoing momentum of the agency’s success.

Prior to his appointment at Inferno, Chris served as the strategic lead on the Ladbrokes and Lucozade accounts at SapientNitro across brand and digital work. Previously, Chris worked in Australia at both the BBDO and Lowe networks, on a range of clients including Ikea and Honda and gained experience across a number of government campaigns.

Chris Said: “I can’t wait to get stuck in – the world of advertising has changed so much and agencies like Inferno, who can work across the entire marketing mix, are the future. It’s an exciting place to be at the moment with a number of recent wins and the opportunity to do some great work.”

Mark started his advertising career in Hamburg before he moved to London for a role at Leagas Delaney. Throughout, Mark has worked for top tier agencies, including Ogilvy and HHCL, working on accounts such as Mercedes, TFL and Sky+.  Before joining Inferno, Mark held the position of Deputy Creative Director at Iris London for five years, exercising his skills across the entire media landscape.

Mark Said: “One of the things that attracted me to Inferno was the company’s creative leadership. Having worked with Al Young before at HHCL, I am looking forward to working with him again. I was also drawn by the company’s core ethos of making the world ‘more interesting’. The scope for creative invention has never been so vast, and Inferno is leading the way, fully embracing all the modern resources available to our business.”

Frederico previously held the position of Creative Director at TORKE, Portugal’s foremost guerilla ad agency. After winning the agency its first Cannes Lion, in addition to 30 other creative awards, Frederico left TORKE to serve as the Brand Action Lead at Brandia Central, working on accounts including Vodafone and UEFA.

Frederico said: “Having worked for TORKE, an agency based on revolutionary creativity, I am eager to take my ideas and passion to the next level. Inferno doesn’t shy away from being different, which is an outstanding trademark. ”

Tim Doust, co-Founder of Inferno said: “This is an exciting time for Inferno as we continue to win high profile accounts and present groundbreaking campaigns; we are certain that Chris, Mark and Frederico will bring even greater value to our senior team profile.  Their deep understanding and robust skills in their respective fields holds much promise and reflects the high standards and ambition of our agency.”