Industry Vets Prepare for the Ultimate Heist at CREAM 2015 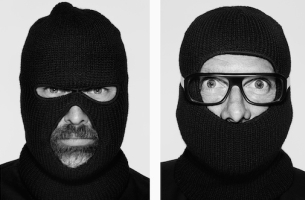 Inspired by the agency’s location and surroundings, Grey London has devised a ‘rough diamonds’ theme for the event, encouraging advertising’s A-List to bag themselves some raw, uncut talent.

Invitations to the event comprise embroidered balaclavas and a specially commissioned series of photographs, shot by Rankin, which showcase some of London’s most senior creatives wearing the striking headgear themselves:

The work was created by Stevie Rowing-Parker & Emily Churches and Hanna Stenwell & Joyce Kremer and creatively directed by Dave Monk. It was designed by George Goldsack.

Tanya Livesey, managing partner and global head of creative talent at The Talent Business, says: "Unearthing the raw talent that will be the industry's leaders of tomorrow is a constant quest, so CREAM is a fantastic platform for connecting the bright young creatives, fresh from colleges all over the world, with the ECDs that can give them their first breaks in the business.  It’s such an inspiring event to be part of every year so we are eternally grateful to our incredible hosts at Grey London and the ECD judges worldwide that help make it possible"

Dave Monk, deputy ECD at Grey London adds: “CREAM is an institution, and we’re chuffed that we’ve been asked to host it. ‘Rough diamonds’, given the heritage of Hatton Garden and the nature of the competition, was spot on as a concept. Big thanks to Rankin for shooting it, and to our sporting models, who I assume had more important things to be doing than donning balaclavas for us.”

Graeme Hall, Creative Lead at Google Creative Labs and a past CREAM winner adds: “"Being one of the 20 winners in 2003 directly led to my first job at DDB London, and a career that has taken me around the world and beyond all my expectations. CREAM has consistently stood apart as the best competition for young, undiscovered creatives. When I started my career, I wanted to win it. Now, several years later, I want to hire those that win it. Long may it continue.”

CREAM is an annual competition held by The Talent Business, which introduces the best graduate creative teams and individuals worldwide to the creative directors of the world’s leading advertising agencies and creative businesses. Now in its 16th year, the competition culminates in a private view, which will be held at Grey London.

Recently, winners of CREAM have found that the competition has led to immediate offers of placements and full-time jobs, from agencies such as Droga5 London, adam&eveDDB, Wieden+ Kennedy and Mother.