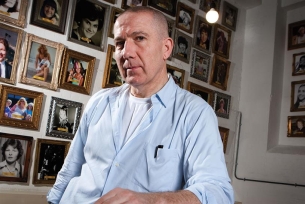 Dave Dye, one of the industry’s most respected and awarded creatives, is joining J. Walter Thompson London as a Creative Director and Head of Art.

A true industry heavyweight, he has worked at some of advertising’s biggest and most creatively revered agencies - including two he launched himself.

He will work across all accounts bringing this wealth of experience to bear in driving excellence, ambition and discipline in all areas of creativity and art direction.

He will also be responsible for making sure the agency continues to deliver a hugely diverse portfolio of work for its whole client base, such as KitKat “Bendgate”, Mr Kipling “Edible Poster” or Shell’s “Morrow da Mineria” – the people powered football pitch.

As a revered master in the craft he will also be pivotal in nurturing, mentoring and bringing together the new young talent hired by the agency in areas such as social, experiential and digital design.

Russell Ramsey. Executive Creative Director at J. Walter Thompson London, said: “Dave is one of the art direction greats - a real master of the craft with amazing experience.

Obviously, he’ll have a huge impact on the excellence and diversity of our output - but the hiring means more than that. He’ll have the opportunity to develop and inspire the young talent in the building.”

Dye added: “J .Walter Thompson has evolved into a great modern communications agency creating hugely diverse work (look at KitKat if you don’t believe me) for a brilliant range of clients. The visual side of communications has never been more crucial, whether uniting disparate channels or capturing the essence of a brand, and I can’t wait to get started.”

He started his career at Brooks Legon Bloomfield Agency as Art Director before moving to Simons Palmer Denton Clemmow & Johnson while the agency was in its hey-day. He then spent 5 years cementing his growing reputation as one of the industry’s best Art Directors at Leagas Delaney. He then worked at BMP/DDB and AMV/BBDO before launching his own successful agency, Campbell Doyle Dye in 2002. The agency created famous work for clients such as Mercedes Benz, Adnams, Merrydown and The Macallan.

After launching Dye Holloway Murray in 2007 (which changed its name to Hello People) and creating award winning work for the likes of Google and The Economist he moved to Mother as Head of Art/Creative Director.