Duo from The Campaign Palace Jakarta get ready 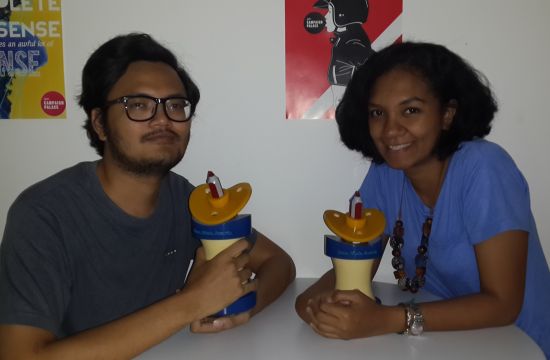 A dynamic young duo from The Campaign Palace Jakarta, part of Y&R Group Indonesia, have been chosen to represent Indonesia at AdFest 2014’s Young Lotus Workshop being held in Pattaya Thailand this week.

Edwin Yacob and Francisca Kandida won the Indonesian Citra Pariwara 2013 Awards’ ‘Daun Muda’, beating out stiff competition from 103 submissions by creative teams country-wide. A shortlist of 10 finalists was selected who then presented to jurors which included officials from client KPK.

The two-day brief was to help Indonesia’s Corruption Eradication Commission (KPK) fight corruption, unfortunately a well-publicized nationwide problem. Teams were given the freedom to approach it with any idea and media to maximize campaign effectiveness.

Following extensive research into the issue of corruption, Edwin and Dida came across the core insight of ‘shame’ as a powerful trigger for repentance. Their winning idea ‘KORUPSIPURA’ centres around presenting an annual award to the most corrupt city, based upon KPK’s own statistics on the number of corruption cases in each region.

Commenting on the win, Edwin and Dida said, “We are looking forward to the workshop, new experiences and new friends. There’s also another competition awaiting us, the Young Lotus Competition in which 13 countries (including us) will compete. We feel quite ‘patriotic’ since we are going to represent our country.”

Added Ronny Pratama, Creative Director, "Edwin and Dida are the new talent and the future of The Campaign Palace Jakarta. Their win at the Daun Muda Awards has inspired all of us and I am confident that they will make Indonesia proud at the Young Lotus Workshop."