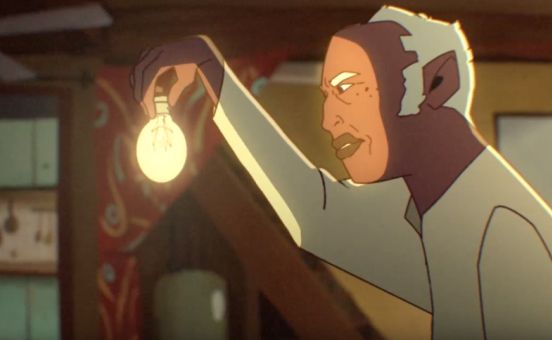 An unbreakable light bulb won’t stop shining in a new animated campaign to promote the International Organisation of La Francophonie. Conceived by TBWA\Paris and brought to life by director Vincent Gibaud and production company Jungler.
The film follows an old man and his grandson as they find an indestructible light bulb. The rest of the world piles in and attempts to destroy it, but in the end it keeps on glowing – a metaphor for the enduring strength of La Francophonie, the organisation of French-speaking countries that cooperates on issues around human rights, education, research and the French language.
Michaëlle Jean, Secretary General of the Francophonie explains why this idea of ‘indestructible’ hope resonates so much with the organisation. “The Francophonie will be indestructible, as long as it is not solely the mission of the leaders of its nations and governments, but also of its people and battle-ready generations that stretch over five continents,” Michaëlle says. “It is, during these dark times in which our universal values, principles, rights and liberties are put to the test, in the strength and energy of these millions of women, men and young people filled with a will that endures, courageously, day after day. The French language is what unites them to act with an awareness of our interdependence and the interdependence of the challenges to be overcome.”
It's the first campaign for La Francophonie, an organisation that was first established in 1970. That’s why the team at TBWA\Paris were particularly keen to get involved. “For many years, TBWA has invested in associations and NGOs which actively participate in transforming our society. Supporting the International Organisation of La Francophonie for its first public campaign seemed like an obvious choice for us and it’s an honour to be able to defend such beautiful human values,” explains Anne Vincent, Executive Vice President of TBWA\Group.
The film was launched on October 11 at the 17th Francophonie Summit. The OIF (Organisation internationale de la Francophonie [International Organisation of the Francophonie]) comprises 58 member States and Governments, along with 30 observer countries. It carries out political and cooperative actions focused on promoting democracy, education, equality and human rights. The campaign will enjoy a substantial media campaign over the coming months, notably through its partnership with Francophonie operator TV5MONDE and France Médias Monde. The spot will receive heavy airplay throughout the coming year in prime Francophonie viewing slots on TV5MONDE and France 24’s French, English and Arabic broadcasts.
By choosing to create an animation, the team are leaning into a particularly French strength too. The world’s first cartoon ‘Fantasmagorie’ was created in France in 1908 and the French government has long supported the animation industry through tax incentives and investment. These days animation is a calling card of French language cinema.
view more - Creative