In With The Old: Marketers Need to Embrace the Over 50s

Trends and Insight 606 Add to collection 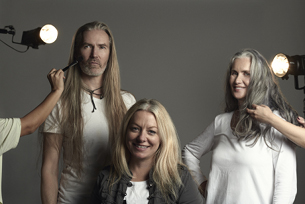 Rebecca Valentine launched Grey Model Agency, a company specialising in mature models – it may seem a surprising move in a youth-obsessed culture but Rebecca had noticed an increasing appetite for elegant grown-ups. Baby boomers represent the most economically powerful demographic in developed countries and that’s being increasingly reflected in fashion mags and advertising. LBB’s Laura Swinton caught up with Rebecca to learn more…

LBB> Grey launched in June this year – how long had you been playing with the idea of launching and why was this year the right time to do it?

RV> When I worked as a photographic agent, I ran an extras agency primarily as a resource for my photographers so we had a bank of 'ordinary people' on a database. During this time, I noticed that the older models were booked more frequently than anyone else, which I supposed was due to supply and demand. The seed was sown and five years later it seemed the market had begun to make stronger demands for true representation and the use of models who looked like them.

The concept of Grey began in February 2015 when I began researching and realised there were no model agencies specialising in mature male and female models across fashion, advertising and editorial. I recruited 40 models at a secret casting we launched in June 2015. Slowly the industry and marketing departments are heeding the call and we are seeing a steep upturn in the use of mature, non-celebrity models.

LBB> Which brands do you think are successfully connecting with older demographics and why?

LBB> There seems to be an increasing appetite for older women among certain fashion brands and publications – earlier in the year Iris Apfel starred for Kate Spade and then there was Joan Didion for Celine. Do you think these high profile campaigns marked a watershed moment? They certainly got people talking but do you think they’ve had any kind of knock on effect on other brands?

RV> No, because Ari Seth Cohen has, in fact, been documenting ‘Advanced Style’ for over eight years – women who own and present formidable and unique personal style – these women actually dreamt up, actioned and ultimately revolutionised anything the world terms as popular culture. Brands must, must sit up, take notice and change – some are, some do not know how.

LBB> I imagine you get quite a few requests for pretty stereotypical roles – the gran, the cougar etc. – what’s the key to creating rich, full, interesting, creative older characters for print or TV campaigns?

RV> Yes, almost all the roles on offer are for Grannies, Grandads, nursing homes, illness sufferers or recoverers, cougars (Helen Mirren is a popular reference in briefs) – we also have lots of requests for 50 somethings and when my 50 somethings get to the casting they are told they look too young!

The key to portraying the age group spanning 40 to 90 and beyond is to show the diversity. People aren’t sedentary after 50, they are not all ill, they are not identifiable by their relation to family – some decided never to have a family at all (shock), they do not all do ballroom dancing, bowling, watch daytime TV and talk about the good old days. Think about what you do, what a 21-year-old does, what a seven year old does and you are somewhat closer to a truer representation.

LBB> Why should brand strategists and creatives think more seriously about how they portray older people in their campaigns?

RV> Because they command the largest proportion of the market spend, they are growing in size and power and they are very cynical and miffed about how they have been portrayed for too many years, so marketing tactics simply do not reach them. Most have iPads and before long they will probably come up with their own inventive virals, and reach their own demographic via their own social network platforms. They’ll use models their own age, and they’ll make even more money as marketers themselves.

LBB> Which recent campaigns or projects have your models been involved in are you particularly psyched about and why?

RV> It would be Chinese fashion designer and face-to-watch Youjia Jin using four of my models for her LFW catwalk and Lookbook to present her new collection, which was inspired by the dynamic between her and her mother – both wanting to wear a style that was not age-shaming.

China is the new younger sibling on the block, with fresh eyes and a finger on the pulse. In fashion, the East often looks to the West for direction. Grey is the first model agency of its kind in the world, but at London fashion week it was a young Chinese designer who had the vision. In Indonesia this month, one of my models will walk for their top designer, she is a silver haired beauty – we are redefining age and beauty. Hunger Magazine also did an excellent fashion feature with our models Sanna, Frances and Alex wearing Prada with no hint of eccentric ridicule, they just look cool.

LBB> Grey is also getting ready to launch internationally – how do other markets compare to the UK in terms of their attitude towards or appetite for older models? In countries with aging populations like Japan, Germany, Finland, Italy have you noticed a particular demand?

RV> We receive in excess of 30 applications a day from overseas models seeking representation, requesting information on similar agencies in their territory (for example, South America, Far East, Pan Europe, Africa, and the USA). Grey has made the UK a forerunner in mature models – men and women – we are talking with the British Council to harness this and expand Grey overseas – private investors are very welcome!

LBB> More generally, the Grey story also fits into the idea that the modelling industry needs to be more diverse in terms of body type, age, ethnicity etc. What are your thoughts on this? Do you think we’re going to see meaningful change any time soon? And what responsibility do brands/marketers have in this?

RV> Yes it is. The market is driving all of these changes; the social network platforms have provided the forum to have a voice. Beauty is a wonderful thing to gaze upon and nobody wants to lose that magic. The concept of beauty, however, is on the move as we embrace more diverse beauty than the portrayal that has been peddled for so many years now.

Grey Model Agency founder Rebecca Valentine will be speaking on the 'They've Got Money, They've Got Time... Haven’t They? So Why Aren't We Better at Marketing to Those Over 50?' panel at Centaur’s Festival of Marketing, 12 November 2015.