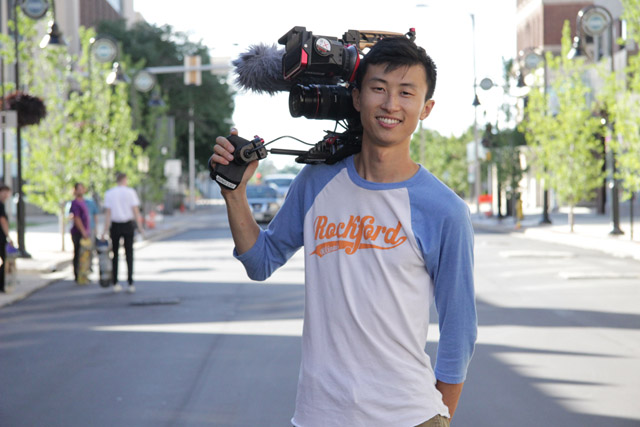 In January, documentary director Bing Liu won the Sundance Special Jury Award for Breakthrough Filmmaking on the strength of his feature documentary, 'Minding the Gap'.

Since then, Bing and his film have continued racking up awards at major film festivals; notably, Bing was also selected for SHOOT Magazine’s prestigious New Directors Showcase for 2018.

With “Minding the Gap” set to premiere in select theaters across America and on Hulu on August 17th, Nonfiction Unlimited partner/executive producer Loretta 'LJ' Jeneski quizzed the rising director on some questions of special interest to the world of branded storytelling.

Loretta Jeneski> What is the meaning of your film’s title?

Bing Liu> Long before I ever knew that 'Mind the Gap' was a London tube safety message, the phrase had floated around my lexical universe probably through osmosis. I always thought it was a loaded concept, so polite and subtle but with the hint of danger and risk as well. I think it just fit so well with the subtleties and pitfalls of growing up and confronting the past in order to move forward.

LJ> You approached the film’s cinematography in very specific ways – can you describe how you shot and why you chose the approaches you did?

BL> I wanted to combine the gritty skate videos and independent '90s films I emulated as a teenager with the cleaner cinematic language I'd built up working with top-class ASC cinematographers on commercial and dramatic projects in my 20s. So even though I lit many of the interviews, I kept it very subtle so that it felt like it was all natural lighting. And even when I had the camera on a tripod, I kept it loose and floating. The skateboarding was shot with a Glidecam while I ran on foot following the skaters--it was important that the camera be at eye-level to focus on the human perspective rather than to glorify the footwork.

LJ> What’s the best advice you’ve ever been given, who gave it to you, and when did you first realise its value in your life?

BL> My mom told me when I was a kid that, "You'll understand when you're older." Within that are so many lessons in patience, humility, and an everlasting growth. I feel like I realise its value every time I think about that nugget of wisdom. I never want to stop learning and chasing my curiosity, but I also remind myself that people are the experts of their own experiences, and that truly listening to them is a great honour.

LJ> What’s next for you in the world of filmmaking?

BL> I'm excited to be delving into dramatic and commercial work. I still find coming-of-age and the subtleties and intricacies of youth to be my interests, but as I get older I find myself exploring many other themes as well.

LJ> Do you think your style will affect your work in commercials and branded storytelling?

BL> I believe that my greatest strength lies in my deep curiosity for finding out what makes people tick and what the contours of their interior lives look like. I've also been shooting and editing since I was 14, so there's an innate visual language that comes almost intuitively to me. Having seen tons of technological changes in cameras since then, I still find emotional storytelling the most moving, and it's the type of storytelling I'll be bringing to commercial and branded content.

'Minding the Gap' debuts on Hulu on August 17th at this address.