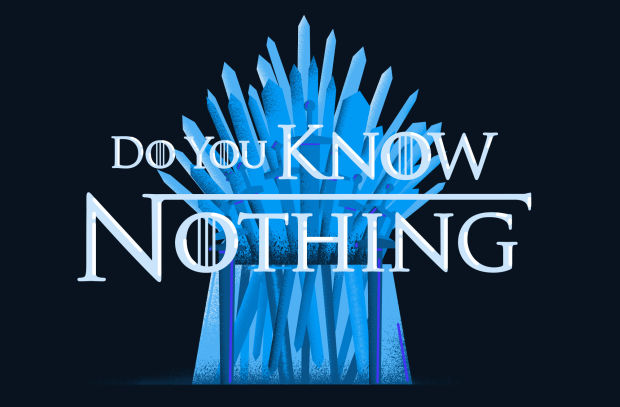 Independent creative agency Impero has launched a Game of Thrones fantasy league prediction site ahead of the final season of the iconic show. Launching today, Do You Know Nothing taps into worldwide speculation around the plot twists that lie ahead now that the show has gone off-book for Season 8. Who will sit on the Iron Throne? Is Cersei really pregnant? Will the White Walkers win? Nobody knows, but everyone has their theories…

Contestants are challenged to put their prediction-skills to the test through weekly questionnaires, taking on players around the world episode by episode, and getting weekly updates on exactly how much they know. Non-viewers are also welcome to participate, inputting random answers to see if they can finally quieten their smug Game of Thrones-obsessed friends.

The competition has been designed by the agency’s in-house team of super-fans, who are as excited to play as they were to create the site itself.

The game will be hosted on www.DoYouKnowNothing.com. After logging in through email or Facebook, users are greeted with a personalised welcome message and given a multiple choice quiz on the outcomes that they predict for GoT, in addition to a series of true or false questions based on some of the Internet’s most popular fan theories.

Do You Know Nothing will be updated every Tuesday for the 6-week run of the season – offering users weekly accuracy percentages, a shareable image with exactly how much ‘they know’, new questions based on the previous night’s episode, and the chance to see how they’re faring on the global leaderboard.

The Impero creative team aims to make Do You Know Nothing's leaderboard a hub of international rivalry as it tracks the progress of all contestants. Players will be able to see how their friends, colleagues or enemies are performing in the weekly predictions battle, as well as track their own progress with a weekly update on their knowledge, which can be shared with friends via their social networks.

Michael Scantlebury, creative director and founder of Impero, said, "Do You Know Nothing has been a real passion project for our team because most of us are unashamedly addicted to the show. We wanted to excite and engage with the Game of Thrones fandom at this moment of uncharted territory and help them to share the thrills and spills of each episode with friends, family and the global Game of Thrones community. More importantly, the winner will earn the right to declare ‘I know everything’, with proof to back up their bold claim.”

Do You Know Nothing is available to play here.