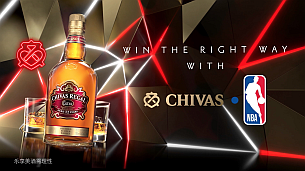 In September 2017 Pernod Ricard announced a partnership with the National Basketball Association (NBA) in China, for its flagship whisky brand, Chivas Regal.

Impero, were the creative agency responsible for the series of short CGI videos that played alongside the NBA Championships in China on TV, online and during stadium games.

The ads feature a series of CGI basketball courts, basketballs being turned into ice and a back board that smashes and transforms into ice cubes that land into poured glasses of scotch whisky.