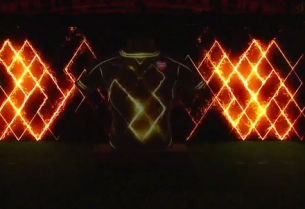 Immersive created animation and projection for Arsenal’s reveal of the new 2015-16 gold and navy away kit. The launch took place during the pre-season tour in Singapore. The design is based on the 2001-02 double winning season, with manager Arsene Wenger hinting that the return to a similar changed strip of the 2001-02 campaign will produce the same degree of success achieved that year. The electrifying visuals showcased the new lightning themed logo. The projection first showcased the new red home kit, then transformed via electrical sparks and energy, powered by the fans chants, to the gold away kit.

Immersive were responsible for all content creation including ensuring that the 2D design files from Puma of the 3 Arsenal / Puma kits would fit the torso model via accurate texture painting and that, through a lot of feedback with PUMA, the football kits were an accurate representation of the real shirts themselves. Immersive worked with creative agency Innovision and interpreted their brief and storyboards in order to create all the content. A further creative challenge was to make sure that the designs and logos were not distorted as a result of the inevitable stretching of designs of the Arsenal shirts onto the torso model. A lot of time was spent making sure that the shirts were as accurate as possible.

“Having developed and used the Ai system at Immersive since day one of its existence, we have had the opportunity to map and plan pixel and projection mapping projects all over the world at every level of production,” commented John Munro, director of Immersive. “That being said this project was still a challenge, but we are fortunate to have a deep experience of the node based tools available in Ai that make it such a unique medium for projection mapping; it's array of options enabled Immersive to quickly try multiple approaches and settle on the most elegant and efficient solution for this particular situation” he added.

The spectacular fan activation took place on 14 July at the Esplanade in downtown Singapore. Hundreds of local fans sang a classic Arsenal away chant to power the countdown to the launch before a graphical ‘lightning storm’ struck the LED walls. Gunners legend Thierry Henry played the role of co-host, interviewing a selection of the crowd and, eventually, the players themselves. 1,500 Arsenal fans gathered beneath the famous North Bank terrace to take part, while over 108,000 viewers from around the world watched the spectacular launch via a PUMA live stream.