The campaign was directed by Caviar’s Marielle Heller, who continues to make her mark in the advertising arena 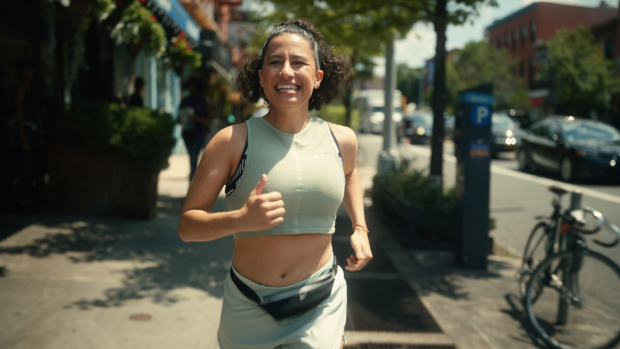 Beloved Broad City alum Ilana Glazer hits the streets with a spirited slice of humor in the new Nike Joyride campaign. Produced by Caviar and directed by Marielle Heller, the series of three spots were created by New York and Portland-based agency Megs and Shamus, and highlight the shoe’s unique benefits through the eyes of reluctant runner, Ilana Glazer.

WithBrooklyn’s Fort Greene neighborhood as the backdrop, Ilana pounds the pavement – or at least considers it – in the campaign, which is playing digitally across Nike’s social channels. With only a couple of hours to capture each spot, together Megs and Shamus and Marielle provided Ilana with solid scripts and the freedom to do what she does best - improvising and adding her distinctive Ilana voice to everything.

Keeping things bouncy and fun, Glazer's quest to track down the meaning of the “runner's high” is the perfect vehicle for her cheeky sense of humor. In “Beads vs. Balls,” Ilana spectates from her stoop and attempts Step One: Make contact with runners. In the follow-up film “What’s in it for me?,” she asks crucial questions and considers the lesser-known benefits of running, from carbo-loading to having an ever-ready excuse to cancel plans. In the centerpiece spot “Runner’s High,” Ilana laces up to make the transformation from cautiously curious to Joyride convert.

Megs and Shamus’ non-traditional approach to the creative was steered by the audience they wanted to speak to with these ads - the skeptical and running-averse crowd. With Ilana as the campaign’s muse, the team knew it was possible to nail that ethos and communicate about both the product and running in a candidly honest way.

Also an actress, Marielle was the perfect choice to direct Ilana through these pieces. From the first call, the collaboration was a seamless process, say Megs and Shamus: “Mari perfectly understood what we were trying to achieve, and bought into the arc straight away. Her goal was to create a world for Ilana to play within that felt simultaneously real and beautiful. We wanted these lighthearted comedic films to feel cinematic and rich, and Mari brought that vision to life.”

The Nike Joyride campaign adds to Marielle Heller’s growing presence in the advertising arena, as she continues to make her mark in film and television. Her latest feature, A Beautiful Day in the Neighborhood, starring Tom Hanks as the iconic children’s entertainer Mr. Rogers, will be theatrically released on November 22, 2019. Marielle’s debut feature film, The Diary of a Teenage Girl, won awards at the Sundance Film Festival, before getting scooped up by Sony Picture Classics.She also directed the movie Can You Ever Forgive Me?, starring Melissa McCarthy, and has helmed episodes of Transparentand Casual.