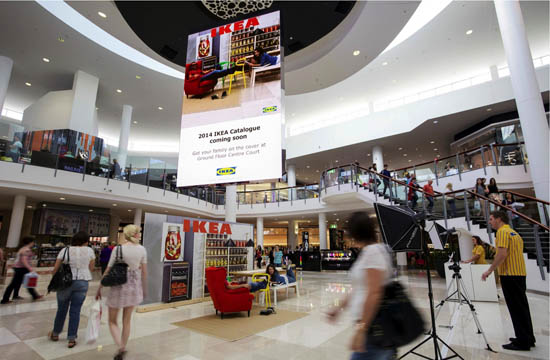 Match Media has created a new way to get people involved with IKEA’s 2014 Catalogue.  Despite it being the second most printed publication in the world, Australians weren’t registering receiving it, even with it being delivered to 80% of the primary market area.

So, rather than rely on a letterbox drop to get the new Catalogue into homes, Match Media, in collaboration with Drifter, developed an activation which gave Australians the chance to participate and make the Catalogue their own.

In the two weeks leading up to the Catalogue being dropped, activations in Westfield and IKEA stores have been set up for people to have a photo with their friends and family in front of the IKEA 2014 Catalogue.  Not only will this automatically upload to the giant atrium banners in Westfield, consumers will also be able to share it via Facebook, and take a printed copy home for themselves.

For those unable to make it to IKEA or Westfield, a Facebook app has been developed by Drifter where users can choose from their own photos and upload them to the cover.  The most creative photos win a chance to star in the campaign and also win IKEA gift cards.

Digital display banners in shopping centres and online activity will be used for the announcement phase to make sure people look out for the Catalogue.  The Facebook app will be left open so that people can continue to personalise their cover.

“We have made it possible for Australians to create their own IKEA Catalogue cover with their friends and family. The IKEA Catalogue is a major source of home furnishing inspiration so creating an opportunity for customers to personalise theirs is a great way of getting people to hang on to the Catalogue all year long,” said Rebecca Darley, Country Marketing Manager, IKEA Australia.

“We’ve been working with IKEA for ten years and in that time the Catalogue has become a must have for every household. This latest campaign invites consumers to be part of the Catalogue themselves. As a result we have brought the ‘IKEA effect’ into the communications in the hope consumers have a closer connection to the Catalogue” said Nick Wokes, Communications Director, Match Media.