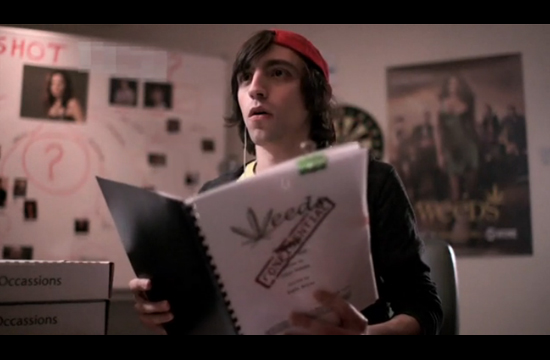 Entering the eighth and final season of its ground-breaking satire, ‘Weeds’ Showtime turned to creative/production/post boutique IKA Collective and director Ian Karr to helm a 4-spot promo campaign that cleverly builds on the cliff-hanger that ended last season. The final episode left viewers not knowing whodunit, or even who was shot. In the promos, a variety of characters infiltrate the ‘Weeds’ writers’ room and do a little story editing of their own. Everyone has an opinion. Including the janitor, the security guard and a pizza deliveryman.
“I love the idea that everyone’s workplace has a secret, after-hours life,” Karr says. “These spots allow us to be voyeurs and enjoy watching what people might do if they knew no one was looking.”
Each spot begins with an exterior shot of the ‘Weeds’ writing room. Different folks (a pizza deliveryman, a security guard and a janitor) enter the room, peruse the confidential script and make themselves at home. They see a large whiteboard displaying all the potential suspects and, after making sure no one is looking, write in their own guesses about the shooter. Each leaves the room laughing, as if they just pulled a fast one on the writers. The spots end with the tagline ‘everyone has a theory…’
Security Guard:
Pizza Deliveryman:
Janitor:

“Showtime's Paula Mermelstein, Rachele Honner and Tony Castellano came up with a great campaign. I love stories than can be told 100 per cent visually. These spots had almost no dialogue, so we incorporated a lot of improvisation and physicality. Casting was key and these actors brought great instincts to their performances. My job was to take what the actors gave us, nurture it and find ways to build on it.”
Karr added: “Projects like this really showcase what IKA Collective can do creatively. Having everything in-house and being able to scale up or down as the project requires allows us to get the highest production values possible. Showtime is known for industry-leading work and I’m proud that they continue to turn to IKA for important series launches and promotions.