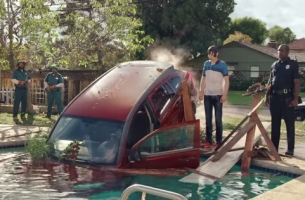 Young & Laramore & Indiana Farm Bureau has released the latest spots in a successful four-year campaign built on a simple idea - that insurance is so complicated, boring and technical that most people don’t understand (or care to know) what their policy actually covers. Instead, many of us go through life knocking on wood, just hoping if anything bad happens that it will be covered by our insurance

Through multiple seasons of the campaign, the creative has never approached the tagline literally – instead focusing stories on demonstrating the dangers of ignoring insurance coverage. The new Super Bowl spot takes a different, more direct route, to hilarious ends. “Pool” introduces the “slow knock,” a tongue in cheek nod to the “slow clap.”

The spot opens on the aftermath of an accident, people standing around stunned by the scene ... when slowly, very slowly, the offender knocks on wood, hoping that he’ll be covered by his insurance policy for the damage just done. The knocking clearly mimics the rhythm of a slow clap, which eventually builds to a frenzy before being snuffed out by the Indiana Farm Bureau Insurance logo. Because with IFBI knocking is never required.

Thinking Of Buying An Oculus Quest 2? Here’s All You Need To Know
Macy's Introduces Tiptoe the Reindeer in Adorably Nostalgic Holiday Film
UNESCO's ‘Cookie Factory’ Raises Awareness of the Potential Risks and Ethical Challenges of AI
Perfetto: Why Brand Building and Brad Pitt are Key to De’Longhi’s Growth Strategy