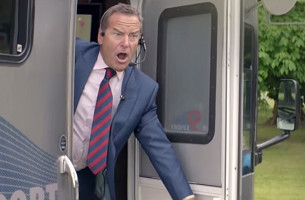 Designed by creative agency, 72andSunny Amsterdam, the commercial focuses on a typical kickabout; a casual game of football between friends in a park, which is transformed by Carlsberg into probably the best kickabout in the world, illustrating what the world would be like if it was as superior as a Carlsberg beer:

-  A hamstring injury is miraculously healed in seconds as a player becomes a younger, slimmer and fitter version of himself with just one touch of a magic sponge.

-  Passer by Peter Schmeichel appears walking his Great Dane and stops a wayward shot before returning the ball into play with one of his trademark throws.

-  To the delight of the watching crowd, a giant screen proves that a disputed goal has gone in.

Richard Whitty, Senior Marketing Manager Football, Carlsberg comments: “Through the new television commercial and supporting campaign we’re seeking to capture the imagination of football fans all around the world. We know they engage with ‘If Carlsberg did…’ and we think they’ll enjoy our take on the humble park kickabout.

“While the humour of the advert will have widespread global appeal, we’ve also added subtle references to the Barclays Premier League that knowledgeable football fans will understand and expect from Carlsberg, as the beer of football. We hope fans love it as much as we do.”

Nic Owen, Managing Director, 72andSunny Amsterdam: “Intuitive jumpers for goalposts, super slow mo at the park and magic sponges that really are magic. End it with a cold pint and that's a premier league kickabout right there.”

Carlsberg Global Ambassador Peter Schmeichel, adds: “Carlsberg really understand football fans and they know that every fan in the world will recognise this kind of kickabout, when a casual game escalates in the imagination to become more emotional, competitive and dramatic. In my eyes Carlsberg has captured this essence perfectly and it’s fun to be a part of it.”

The new ‘If Carlsberg did…’ TV commercial supports “Doing football better, for the fans”, Carlsberg’s broader creative positioning across all of its football properties (Barclays Premier League, UEFA EURO 2016™ and Liverpool FC) and will run through all of Carlsberg’s sponsorship marketing including Out of Home, PR, media partnerships and on-pack.

The commercial will be shown from 30 July 2015 to coincide with the start of the 2015/16 Barclays Premier League season and will be rolled out across Carlsberg markets including Europe, Asia and Middle East. All strategic media planning and buying will be managed by OMD International.