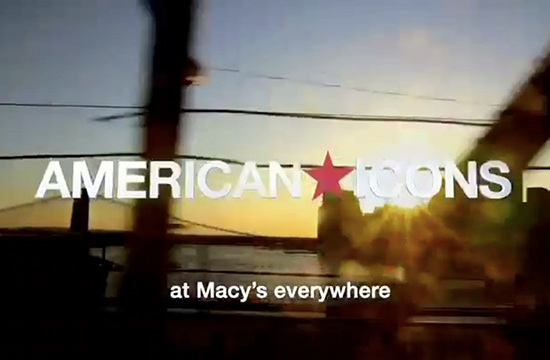 In addition to the :30 ad and long-form film, Sloan and Icontent were also charged with creating the micro-site, social media outreach, creative, copy, music direction (a custom arrangement of James Brown’s hit “Living In America”), editorial and finishing -- all completed in just five weeks. Executive Producer Tania Sethi headed up the digital efforts collecting all of the video submissions.

"The interesting part of the project was creating a shot list and seeing the interpretation from a multitude of ‘shooters,’” Sloan says. “The challenge for me was creating a spot that communicated the ‘by the people’ concept while simultaneously staying on-brand. “It was a different, fresh thought process that was a lot of fun for everyone involved"

Also worth noting is a re-edited short film directed by Sloan profiling fashion icon Tommy
Hilfiger that can be seen in the “Featured Designers” section of Macy’s American Icons website (http://www.macys.com/icons) .