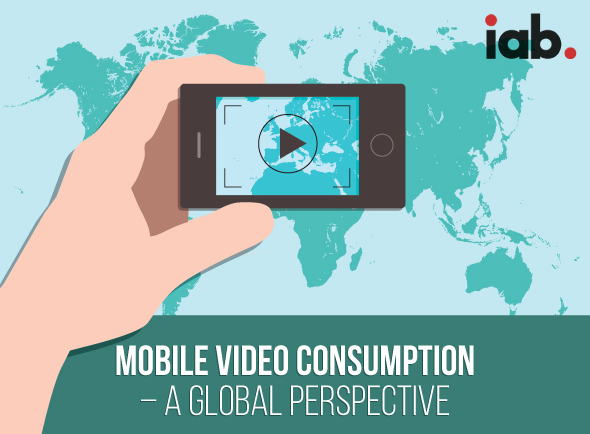 Contrary to popular opinion, mobile screens are regularly being tapped for streaming longer-form video, according to “Mobile Video Usage: A Global Perspective,” a new comprehensive survey of consumers from 24 countries around the world who watch smartphone video, published by the Interactive Advertising Bureau (IAB).

Thirty-six percent of total respondents said they watch videos that are five-minutes or longer on their phones daily or more frequently. Smartphone video viewers in Turkey, Finland, China, Russia and Singapore are particularly frequent viewers of such videos. Longer programming, such as movies and full-length television show episodes, are also frequently viewed by audiences on their mobile devices. Chinese viewers, in particular, are the most inclined to watch both films and TV shows on their mobile screens.

Whether short or long or in-between, substantial numbers of video viewers report their video consumption on smartphones has increased year-on-year in all of the study’s participating nations, with the most prominent upticks seen in the U.S. (50pc), Canada (42pc), New Zealand (42pc), South Africa (42pc), and the U.K. (40pc). This trend is impacting traditional television viewing across the board, with consumers in China (37pc) and Singapore (35pc) reporting the highest incidence of watching less TV due to streaming more on mobile.

“As one of the most advanced mobile markets in the world, it is no surprise that both long and short-form content are popular with mobile video viewers in Singapore,” said Miranda Dimopoulos, executive director, IAB Singapore. “The question before us is how marketers can take advantage of mobile video as a vehicle to communicate their brand message, and provide consumers a rich and immersive brand experience.”

When mobile video viewers do watch traditional television, 22pc regularly do so while simultaneously watching video on their phone. This video dual-screening tendency is evident across all markets measured, with the exception of Japan.

Dimopoulos added, “Over the last five years, mobile technology has continually changed media consumption habits across the globe. In Singapore, our findings show that over 60 percent of viewers are dual screening and watching mobile video and TV simultaneously. While this division of viewer attention poses a challenge to marketers, there is also an opportunity for brands in the region to creatively participate in the dual-screen experience using interactive and engaging methods.”
 
 Across the 24 countries in the survey, there are several common ways that mobile video viewers discover digital video to view on their phones, including: YouTube (62pc); Social media platforms (33pc); Search results (20pc); and, Advertising (14pc).

Apps are indisputably the main method for viewing mobile video in each of the markets studied. Nearly half of respondents overall (48pc) said that they “only” or “mostly” leverage mobile apps to stream video on their phones, with the UK (63pc), Brazil (60pc), and Turkey (58pc) leading the trend. By contrast, across the survey sample only 18pc said they “only” or “mostly” use mobile websites to view video.

More than a quarter (28pc) of viewers across the participating countries said that they often see ads on mobile video that they’ve already seen on TV. Numbers climb higher in France (38pc), Turkey (36pc), Finland (35pc) and the U.S. (35pc). But, marketers might be missing out with this approach – since 80+ percent or more of consumers in most markets expressed interest in any kind of tailored ad versus “I prefer no tailoring of ads at all.”

The findings point to the importance of ads being relevant to the content of the video being watched, but also show viewing history being a significant factor, especially in the U.S. and Canada.

“Audiences around the world are overwhelmingly open to mobile video advertisements that relate to their context and viewing patterns,” said Joe Laszlo, senior director, IAB Mobile Marketing Center of Excellence. “Clearly, this is a real boon to global marketers that want to ensure they reach the audience segments most likely to be interested in their products or services.”

In addition to advertising, the study shows that there is potential for mobile video monetization through subscription and pay-on-demand models. In several markets viewers already demonstrate a willingness to pay for video content that is streamed to phones: China (33pc); U.K. (25pc); Canada (23pc); U.S. (23pc); and Australia (21pc)

Still, there are barriers to overcome for further success in pay-for models – and much need to grow mobile video advertising revenue. Seventy-eight percent of respondents overall stated that they would rather have free mobile video supported by ads.