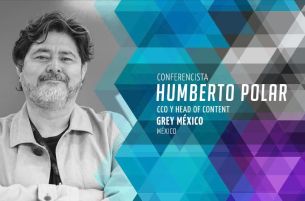 Humberto Polar is the CCO and Head of Content of Grey México. A Peruvian born, he is one of the most important creative leaders in Latin America. His contributions to the creative reputation of the region for the last 20 years are remarkable.

He started in 1986, working in Properú Lintas as a copywriter. Soon he emigrated to McCann-Erickson Ecuador. In 1991 he started DeMaruri, now Maruri Grey, alongside Jimmy and Eduardo Maruri. In 1992 he went to McCann Colombia as Coca-Cola’s Creative Director. In 1995, he won the first Cannes Lion ever for that country with a spot for Tesa Glue.

In 1996, Polar founded Lowe-SSP3 alongside Jose Miguel Sokoloff and Francisco Samper, an agency that started a big change in the Colombian industry. He was ECD in his own agency until 2003, when Lowe asked him to lead the Mexico office. In 2005 he was named head of the Latam Creative Council and a member of the Worldwide Creative Board.

After a sabbatical from 2008 to 2011, he returned to his country to lead another revolution as Creative Head of FCB Mayo. In four years he took the agency to the leading creative position in that market, putting it in the creative international map. In April 2016, he moved to FCB Mexico to lead the creative rebirth of the agency and head the Latam Creative Council. In September 2017 he joined Grey Mexico as CCO and Head of Content.

In 2013, Business Insider selected him as 7th in the ranking of the 25 best creatives in the world. His achievements include 17 Cannes Lions (starting at those times when campaigns used to win one single Lion), 12 Effies, 5 One Show Pencils, many Grand Prix and golds in regional and national awards, and many international campaigns running in different countries.

His achievements in El Ojo de Iberoamérica include a total of 6 awards for Best Local Idea during his tenure in Lowe México and FCB Mayo. He was selected as Creative of the Year for three different countries, including Peru, Colombia and Mexico. In 2013 he was the creative mind behind “The first advertising panel to produce drinking water from the air” for UTC, the Gran Ojo Media of that year. On that same year he acted as Speaker and President of the Jury for El Ojo PR, in 2014 he was President again for El Ojo Sustentable.

This year, Humberto will act as a Speaker again with a conference titled “Cuando Pase el Temblor” (When the Tremor Passes). Humberto will focus on what will remain of the industry after the sudden changes due to technological advances. He will speak about how to maintain the quality of the work after this phenomenon and, with last year’s earthquake in Mexican, he will expand on the current state of the country.

Award entries
El Ojo opens the first extension for the registration of pieces, campaigns and cases to participate in its 2018 Awards. The new deadline is September 10, with discounts for the number of pieces registered.

Those who confirmed and paid their registration before August 10 will have until August 31 to finish uploading their pieces on the site www.elojodeiberoamerica.com.

Those who confirmed and paid their registration after August 10 may finish uploading their work until September 21, remembering that the extended period to confirm and pay the registration is September 10.