"The Truth Stinks” promotes Kopari’s non-toxic,100% plant-based deodorant as better than any chemical versions ever could be for us 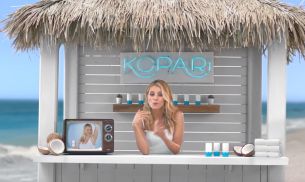 Humanaut created two 30-second cuts of the ad along with a minute-long version that will begin airing online starting today and later this week on TV channels including: Bravo, E!, Heartland, IFC, Ion Life, OWN, Oxygen, We TV.

The 60-second hero ad opens on a vintage TV set showing a deodorant ad in which an attractive woman appears to be pitching a prestige product. “Nothing says confidence like an armpit packed full of chemicals and aluminum,” she says.

The camera backs up to reveal a tropical beach setting, where another woman—Kopari’s narrator— ponders how great it would be if deodorant ads actually told the truth. She shows a few more spots that parody classic commercials with lines like “Try this, it’s what I use to stay dry and have aluminum slowly injected into my body, all day long!” and deliver sarcasm with a smile. And another “Try new pit clogger today!” before sharing the merits of Kopari’s safe, effective, plant-based product. The videos tag with the line, “Wake up and smell the coconuts.”

“We all love to imagine about what commercials would be like if they told the truth” says David Littlejohn, Humanaut Chief Creative Director. “When you inject some honesty into those classic deodorant ads, the aluminum-based products really unsell themselves.”

Kopari’s Coconut Deodorant is a non-toxic,100% plant-based deodorant that works by harnessing the antibacterial ingredient found in the coconut instead of using aluminum to prevent the natural functions of the body. Free of aluminum, baking soda, parabens, silicone and phthalates, the invisible vegan formula glides on smooth without leaving a sticky, white residue. The unique blend of coconut water and coconut oil conditions soothes even the most sensitive underarms. It’s like skincare for your pits.

"At the core of this campaign, we are really seeking to bring broad awareness to the clean alternative we provide to the aluminum found in traditional deodorants and the potential negative side effects it can have on your body,” said Bryce Goldman, Kopari Co-Founder & CEO. “We chose to partner with Humanaut to communicate a fundamentally important truth in the way they do best - with humor and approachability that every woman can relate to and appreciate."

Kopari is donating $1 from every coconut deodorant unit sold this month to cancer research.