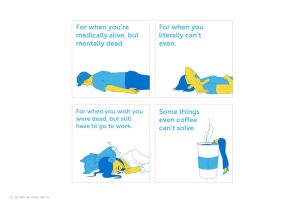 Even with all of our technological advances, our species has yet to invent a treatment for an affliction that has plagued humanity for millennia: Hangovers. Until now. Brand invention agency Humanaut is launching a new campaign aimed to educate people on the benefits of the FDA regulated hangover remedy called Blowfish, right before St. Patrick’s Day Weekend and March Madness.

The campaign launch features a complete overhaul of the Blowfish website and package design. Playful display banners for Google, Facebook and Instagram highlight the pain that’s felt 2.6 billion times each year by Americans alone. Each rings true with headlines like: "For when you literally can't even," "For when you’re breathing but that’s about it" and "For when you’re medically alive, but mentally dead."

“We’ve all had nights that get away from us,” says Humanaut founder and chief creative director David Littlejohn. “It’s been fun to work with a company that takes hangovers seriously and believes people shouldn’t be punished for having a good time. We like to think of Blowfish as the drug company that parties.”

Online videos showcase the awkward office interactions that occur when last night’s fun creeps into tomorrow’s workday. In one animation, a woman tries to remain professional despite an overturned toilet on her head. In another, a man tries to type while a giant octopus squeezes his brain. “Hangovers are the worst,” the ad’s narrator says over an animated shot of the redesigned box. “That’s why there’s Blowfish, for when you feel like dying, but also have to do stuff.”

“If you’ve ever noticed more people taking sick days in March, that’s no coincidence,” says Brenna Haysom, Blowfish founder and CEO. “Work productivity is the biggest victim of hangovers related to St. Patrick’s Day and March Madness. And we’re here to help.” According to a recent study, the day after St. Patrick’s Day is America’s second most popular “sick day” of the year. Amazingly, it’s second only to the opening days of March Madness, which are estimated to cost employers $134 million in lost productivity.