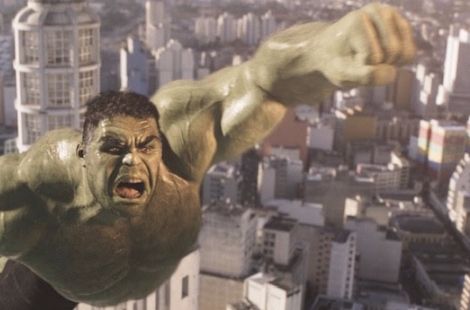 International Oscar-winning creative studio Framestore is showing its cross-platform capabilities yet again by bringing the powerful Marvel character Hulk to life on both film and commercial platforms.

The film team in London and integrated advertising team in Los Angeles collaborated on the latest CG characterisation of Hulk for upcoming Marvel Studios releases and Renault’s commercial ‘Renault Kwid.’

Shot in São Paulo by PBA Cinema director Jonathan Gurvit, the ‘Renault Kwid’ adventure begins as a man imagines what the Hulk would do as news breaks that a satellite is falling towards Earth. Framestore artists brought Hulk to life with his signature leaps and bounds taking him to the top of the Banco Banespa building before smashing the explosive satellite mid-sky.

Famous for his incredible level of superhuman physical ability, Framestore worked to exaggerate Hulk’s strenuous muscle and facial detail. The teams worked closely together to enhance the amount of detail needed in his muscles, including in the rig, muscular weight in animation, textural displacements of veins, lighting art direction to enhance angles, and shot-specific muscle sculpting to refine even further. Other subtle yet essential details of Hulk include peach fuzz on the body, facial stubble and sweat stems.

"Animating characters requires an intimate level of experience and understanding of performance," continues West. "Each character has signature qualities but it's the detail and nuance that brings them to life. Having worked with characters like Hulk over an extended period for film projects, we had a strong foundation to build upon in this regard."

The details of city destruction further accentuate the Hulk’s weight. Framestore enhanced the cityscape of São Paolo to make sure the central Banespa building was in frame as a constant reminder of the imminent fiery satellite.

"These are the projects our artists live and breathe for. We understand the genre and play to its strengths by bringing characters to the screen in a very visceral way," states West.

Other recent Film and Integrated Advertising collaborations by Framestore include ‘Fantastic Beasts and Where to Find Them’ film and virtual reality experience, as well as Marvel Studios’ Guardians of the Galaxy: Vol 2 film, commercial campaign and amusement park ride.