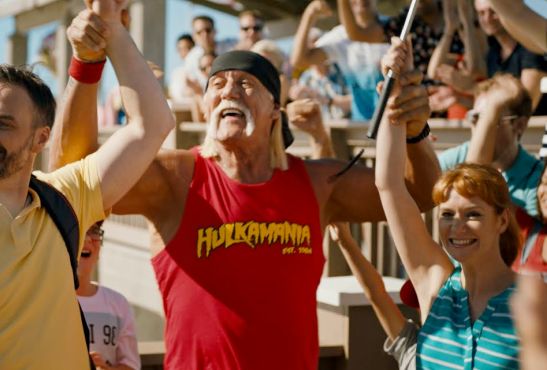 In this latest film, we see Mark, Margreet and their two sons on holiday in America. The family visits one of the busy piers along the coast, only to see a street thief snatch away Magreet’s bag. Luckily for them, the pickpocket is spotted by impressive beefcake Hulk Hogan. But does he come to rescue, or steal the show?

The commercial was filmed in Hulk Hogan’s hometown of Clearwater Beach, Florida, with the usually quiet Pier 60 given a tourist makeover. The 63-year old wrestler and actor who put ‘Hulkamania’ World Wrestling Entertainment on the map was only happy to attend the shoot for a full two days.

Just like the ‘Just Call Us’ commercials before it, the commercial was developed by advertising agency DDB & Tribal Worldwide, Amsterdam and follows the consistently tongue-in-cheek format that’s lasted 30 years.

Ivo Roefs, Co-CEO at DDB & Tribal Worldwide, Amsterdam: “We’re very proud to work with Centraal Beheer on one of the longest-running campaigns out there, and one that is so firmly part of Dutch culture and vocabulary. We hope people enjoy the Hulk’s smooth moves as much as we do.”

‘HULK’ will drive all brand communication for 2017, with Mark and Margreet’s family set to reappear for future product campaigns throughout the year.

Peggy Spaapen, Manager Digital & Market Communications: “By continuing on the same consistent path, Centraal Beheer will bring brand and sales ever closer together. No matter what happens, we want to show that we are here for our customers, day and night.”

‘Just Call Us’ is loosely translated from the Dutch ‘Even Apeldoorn bellen’, with quaint city Apeldoorn the company's first headquarters.

The commercial launches on Dutch television 25 February, with the online versions now live on YouTube. The film was directed by Sven Super, who was also behind the brand’s award-winning ‘Rapper’ commercial in 2016.

Production Company: In Case of Fire