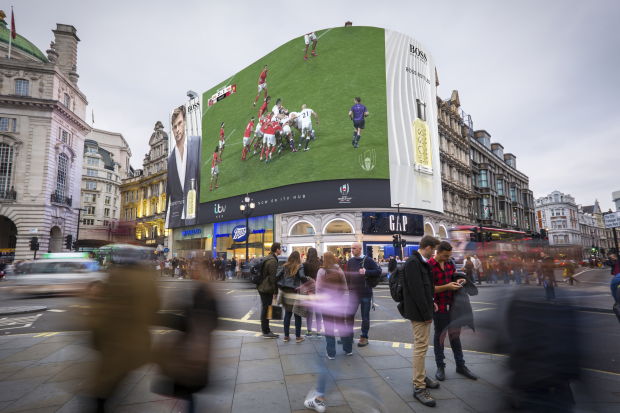 Ocean’s planned coverage of the tournament extends to include 10 exclusive dominations of Landsec’s Piccadilly Lights twice a week, breaking at 11am tomorrow (September 25) and running up to and including the tournament final on November 2.

The 10-minute packages will feature the iconic BOSS BOTTLED and its global fragrance ambassador, Chris Hemsworth.

Activity was planned with COTY, who manufacture and distribute HUGO BOSS fragrances, through specialist agency Posterscope and Zenith Media.

My-Anh Bosquet, marketing manager Hugo Boss, Coty Luxury UK&I, said: “We are thrilled to partner with Ocean on this project. BOSS BOTTLED, launched in 1998, has become a true classic in the fragrance industry celebrating values of integrity and authenticity, so we are always looking for new ways to demonstrate this iconic status.”

Derek Manns, digital advertising manager at Landsec, commented: “Piccadilly Lights is one of the world’s best-known locations for brands to showcase their campaigns. Broadcasting content adds another dimension to this unique platform, and we’re excited to be partnering with Hugo Boss and ITV Sport RWC to bring this exciting global moment live to people in Piccadilly Circus.”

Separately, Ocean has also secured the agreement of ITV Sport and Westfield to show the England versus France game live on its large full motion screen in Westfield Square, London on Saturday, October 12 (kick off 9.15am).

Forty-eight matches in total will be played during the 2019 World Cup, the first to be held in Asia.

England and France have been drawn in Pool C alongside Argentina, the USA and Tonga. Wales and Scotland are also competing in Pool D and Pool A.

During the year, Ocean has also broadcast live horse racing, Formula E racing and broadcast live tennis coverage from Wimbledon in partnership with the All England Lawn Tennis Club, the BBC and Wimbledon sponsor, Jaguar.