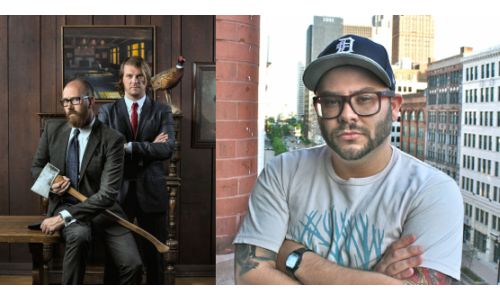 Hudson Edit has increased its roster of talent by three, adding Editor Zach DuFresne and the editorial and design duo Gentlemen (comprised of Editor Derek Swanson and Designer Dave Graw) to its roster. Gentlemen is also being added to the roster of Hudson Edit’s sister company, Avalon Films, for directorial representation. Both companies are based in Detroit.

“We’re so delighted to have Zach DuFresne and Gentlemen join the Hudson Edit family,” says Hudson Edit Executive Producer Kristin Redman.  “Zach has a very diverse editing style, and Gentlemen can do it all. They’re great additions.”

Gentlemen are a creative collective that combines sophisticated editorial techniques with design and motion graphics capabilities.  Its members, Designer Dave Graw and Editor Derek Swanson, have been friends and creative partners since meeting in a basement at a band rehearsal back in 1999.  That led to their longest-running collaborative project to date, the ongoing web series “Solid Dudes Kitchen,” which is described by Detroit’s Metro Times as “the anti-cooking-show cooking show.”

Graw worked as a freelance graphic artist and designer, first in print, later in motion, for a number of companies in the Detroit area, while Swanson worked as an editor for such companies as Beast and Mad River Post.  In September 2013 they formed Gentlemen, which allows them to explore a variety of modes of content creation encompassing both production and post-production.  Recent projects include a music video for the band Bars of Gold and a spot for the Detroit City Football Club.

Graw says one of the things he and Swanson like about Hudson is the culture of the company.  “They’re packed with a great group of weirdo creatives and honest collaborative people with no egos,” he notes.

The connection between Hudson and its sister company, Avalon Films, also provides them with a wider platform on which to work, adds Swanson. “They’ve assembled an incredible group of talented artists, and it’s great that we all have access to each other,” he notes. “They take care of the details and provide us with the tools that free us up to be artists.”

Redman is excited by the possibilities that having Gentlemen available for Hudson Edit’s and Avalon Films’ clients present.  “At Hudson, Gentlemen offer a creative team approach to editorial, design and graphics, and through Avalon Films they’re available for production,” she explains. “Because of the relationship between our companies, we’re able to offer clients a concept-to-completion package on production and post, so we’re thrilled to have renaissance creatives like Gentlemen on both rosters.”

Editor Zach DuFresne joins Hudson Edit from Territory.  In 2007, while at STS Griot, he won first place in the AICE Filmspotting (now known as Camp Kuleshov) editing competition for assistants for his powerful PSA, “Get Out.”  More recently, his work on the Corvette Stingray project “Biometric Test Drive” for Chevrolet was awarded with a 2014 Bronze Telly.

DuFresne sees editing as an opportunity to explore storytelling and connect with people, both of which are personal passions for him. “When you’re working on a job the material comes in, and everyone has an idea about where it needs to go,” he explains.  “So I function as sort of an interpreter, bringing all of those ideas together in the final product.  I’m usually able to show clients something about the work they might not have seen otherwise.”

DuFresne says the offer to join Hudson Edit’s welcoming atmosphere was too enticing to pass up.  “I know the caliber of talent they’ve been bringing on and I love how actively they’re fostering a creative environment,” he notes.  “Hudson is a new company that’s been set in motion by some very established creative people, and they’re doing a lot to build a culture of collaboration.  It’s so great to call Hudson my home.”

Redman is just as pleased having DuFresne on board. “Clients know and trust Zach,” she says. “He’s highly creative and full of energy. We’re very excited to have him on our team.”