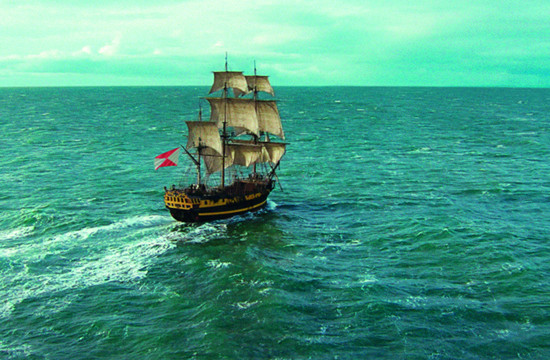 The campaign activity, ranging from advertising to customer engagement, has all been created from the ‘Legendary Journeys’ idea. The work is set to run in the UK, Hong Kong and Australia and shows some of the heroes of Rugby, including Brian O’Driscoll, Jason Robinson, Willie John McBride, JPR Williams and Gavin Hastings, in their naval costumes and playing their own roles on the ship’s voyage. Amid the rugby legends is a young cabin boy – cast from Rosslyn Park as part of the grassroots programme - he can be seen weaving between the action and representing how HSBC bring a future focus to the historic narrative of The Lions Tour.

The journey of the ship and it’s Captain and crew is mapped on HSBC’s Youtube channel (which acts as a hub to the campaign) with a unique and pioneering digital experience that allows people to engage with each of the rugby legend’s own epic journey in their individual sporting histories.  Viewers will be offered the option to click on hotspots over the 90” version of the film to dive into more detailed content about players, and as the Tour progresses, realtime exclusive content from our Lions Legends will also be streamed exclusively to the channel. In tandem, press, twitter activity, Digital OOH and digital display narrate the journey of the Tour itself with reactive highs and lows being brought to life before and after each warm up and Test match game.

The long form interactive film is accompanied by other film content in the form of 60” and 30” spots for UK TV, 15” and 5” idents for the Sky sponsorship package as well as bespoke in-flight copy and versions for HK stadium and Australian TV and stadium respectively.

The HSBC Youtube experience launches from the 16th May preceded by a trailer running on UK TV and the remaining activity breaking alongside the dates of the Tour. It begins in HK on 1st June where the Lions will play the Barbarians before moving on to Australia for the main Tour which includes 6 provincial matches and 3 tests.

The Pogues set the soundtrack to the film, creating the rustic, naval rhythm and atmosphere of the journey at sea.

Axel Chaldecott, Global Creative Director at JWT London said: “In this campaign we have married the legends and the rich heritage that makes the Lions so special with a nod towards the future talent of the game with our young cabin boy – in a sense balancing the future focus of the bank with the strong Lions culture.”

Andrea Newman, Global Head of Advertising and Marketing Communications, said: “Legendary Journeys as an idea encapsulates our role as Principal Partner of the British and Irish Lions in their anniversary year. The campaign that JWT have created brings to life the heritage and pride of the Lions Tour whilst celebrating the legendary journey that players, fans and anyone following the Tour will be immersed into.”