How Will the 'Camp Gyno' Girl Survive Middle School? 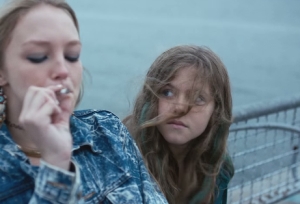 Editing company, Friendshop!, has released the trailer, “Life Choices,” inspired by recently published book “Surviving Middle School” by Dave McGrail. Tim Wilson of Friendshop! concepted, directed and edited the short which tracks the life of “Macy” in reverse, as she recounts crucial choices that may have led her to her current squalor – with each era of her life portrayed by 12-year-old Macy McGrail (of 2013’s viral video, “Camp Gyno”).

The project was brought to Friendshop! by Tommy Henvey and Patti McConnell, ECD and EP respectively at Ogilvy & Mather NY, as a fun excuse to creatively collaborate and explore the relatively untapped platform of book-trailer.

“When Tommy and Patti first pitched the project it was a no brainer,” said Tim Wilson. “It was the perfect opportunity to make good on one of the reasons we formed Friendshop! in the first place: to work on inspiring projects that harness the abilities of everyone at Friendshop!, no matter what “genre” it falls under.”

“It definitely was a labor of love,” described Henvey. “Patti and I were on the road working around the clock, but it turned into a something of a game stealing a minute on the plane or two in the car to write this."

Exercising muscles from their former roles as agency producers, Friendshop!’s Garrett Crabb and Melissa Mapes helmed the production start to finish – but pulled in key partners like SuiteSpot for shoot heft and Able Baker for a killer original score, in addition to the finishing skills of The Mill & audio post production company, Heard City.

The burgeoning company is especially proud to have produced this work in their freshmen year, in the face of some hurdles of their own – overseeing construction on their new home on West 20th street and getting their first year feet under them.