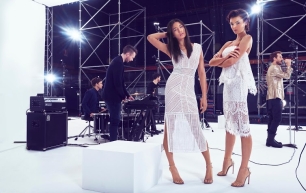 Developed in partnership with Whybin\TBWA Sydney, MAUD, Universal Music Australia, Will O'Rourke, M.A.P. and The Glue Society, #ShotbySound features Daniel Johns and his band playing alongside David Jones Ambassadors Jessica Gomes and Montana Cox. The innovative shoot was controlled by the music, with images captured by 42 customised cameras set up on a rig that were triggered by Daniel’s vocals and the band’s instruments.

Daniel Johns and his band performed the track “We Are Golden”, from his acclaimed solo album TALK, igniting the technology to shoot this season’s fashion campaign. Applying a customised set and telemetric-style cabling, the band was in control of the cameras, and with every sound from the live performance of the artists, first-of-its-kind imagery was captured.

The unique collaboration was also captured on video, with the film to feature as Daniel Johns’ official music video for his new single. The music clip, available on both Daniel Johns’ and David Jones’ YouTube channels, was shot by Sydney production company Will O'Rourke, by director Pete Baker of The Glue Society.

The music video replaces the retailer’s seasonal TVC with the campaign launching on the David Jones YouTube channel with 15-second edits of the music video to be released across David Jones’ social channels to amplify the content.

The incredible series of #ShotbySound images will feature in the retailer’s Spring/Summer 2015 campaign comprising of outdoor advertising, inserts, catalogues, online and social media, to roll out in August.

David Jones General Manager Marketing Communications, Victoria Doidge said, “Creativity and design are inherent in enduring fashion brands and as the home of Australia’s leading international and local designers they are core to David Jones’ identity.”

“Musicians have always pushed the boundaries of fashion and have long been style icons that we admire and mirror. Daniel reflects many of the personality traits we aspire to. He is mercurial, fashion-forward, a creative genius and always ahead of the curve, which is why he was a natural fit for David Jones for our new season campaign,” concluded Doidge.

Daniel Johns said, “One of the things I’m enjoying about working solo after all those years in a band is that it gives me the freedom to try new things. I’ve also enjoyed having an opportunity to explore new creative collaborations so this project was a good fit. It was great to work with so many talented people on the video.”

Paul Bradbury, CEO Whybin\TBWA Group, David Jones’ creative agency, said, “‘#ShotbySound is undeniable proof of the power of collaboration. At every stage of this project we were humbled by the talent who contributed and added their bit of magic.”

David Park, Executive Creative Director/Founder, MAUD said, “Our work with David Jones represents another step in the evolution of our relationship, reinforcing the role this brand plays in Australia’s contemporary life and the blurring of lines between arts and commerce.”

Nadya Balzarolo, Universal Music Australia Brand Partnerships added, “We are delighted to be working closely with David Jones in this creative space. The idea of having the music capture the campaign was too exciting to let pass and I’m thrilled that Daniel helped shape the direction of S/S 2015 creatively.  The use of We Are Golden adds another dimension to the bold direction of this project.”