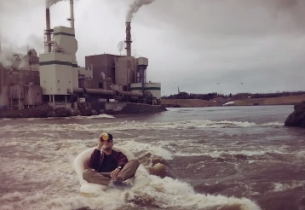 Canadian wireless phone service provider, Fido, and Virtue Worldwide (VICE's in-house creative agency) have launched the first ever location-based mobile music video.  This for new hit track "Save Me" from famed Canadian electronic trio, Keys N Krates, featuring KatyB.  Virtue brought the mobile experience to life in collaboration with director Vania Heymann (hyped most recently for his "Like a Rolling Stone" video for Bob Dylan) and Toronto-based digital production and design company Jam3. Click here to view the music video on your mobile.

The video has the look and feel of a photo-driven social network, taking viewers on a location-based cross-country tour through Canada with Keys N Krates, guided by the beats of their “Save Me" track.  The journey is comprised of 2500+ handcrafted GIFs showcasing different sites and scenes throughout the country that were composited into original Keys N Krates footage shot on a green screen.  Images were submitted by Keys N Krates fans via social media using #MobileMusicVideo, and also garnered from local Canadian artists and photographers.

The 'GIF-bombs' are handcrafted by Tornto-based design and tech agency, Meld, each of which acts as an individual scene sync'd to the track within the video; while an algorithm developed by Jam3 ensures viewers receive a unique location-based experience with each iteration perfectly aligned with the song's structure. Video content will of course continue to evolve as fans go on to submit more photos through social.