Behind the Work 310 Add to collection

LBB’s Ben Conway speaks with Energy BBDO and Black Madre, the agency and studio behind the posters for the City of Chicago’s global campaign 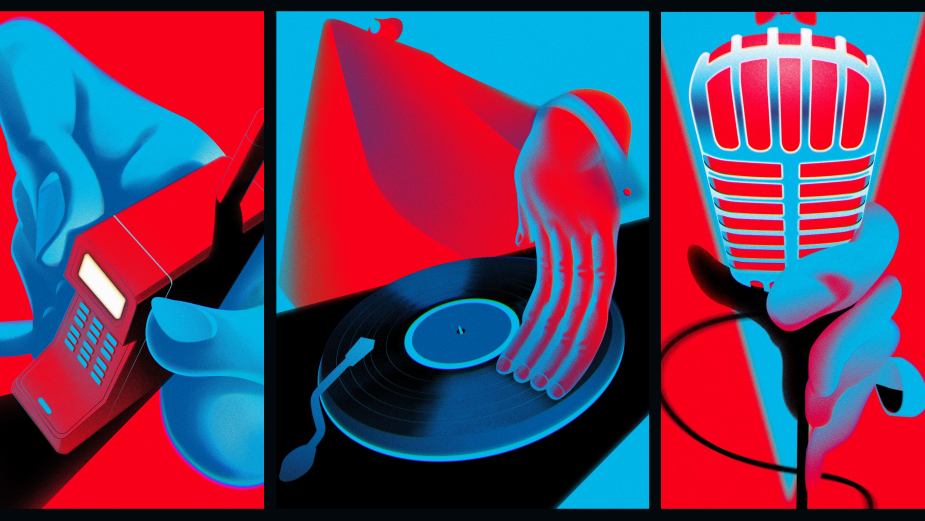 For the City of Chicago’s new platform ‘Chicago. City of Stories’, Chicago-based creative agency Energy BBDO were tasked with creating a tour of Chicago, but not in Chicago. As part of this project, Energy BBDO collaborated with Sao Paolo’s Black Madre fine art and design studio to produce 12 posters that use the Chicagoan flag to show off the many influences that the Windy City has had on the world.

From Hollywood to House Music, to some of New York’s most iconic buildings, the campaign traces the roots of iconic international cities and inventions back to Chicago and celebrates the impact that the city has had beyond its own city limits. Designed with the colour palette and star design of the Chicago flag in mind, the posters tell a vivid story of an influential city for people ‘not in Chicago’ to see and learn from.

With New York being the first stop on this global tour, closely followed by London, the campaign shows just how far the Illinois metropolis’ sphere of influence has reached around the world. It’s the first campaign for a city authority that the studio Black Madre has worked on and they relished the opportunity to take on the challenge of a production that was outside of their normal wheelhouse.

To get an insight on the design process and the production of the posters, LBB’s Ben Conway spoke with André Maciel, partner and founder of Black Madre and the team at Energy BBDO on what it means as a Chicago-based agency to work on the project. 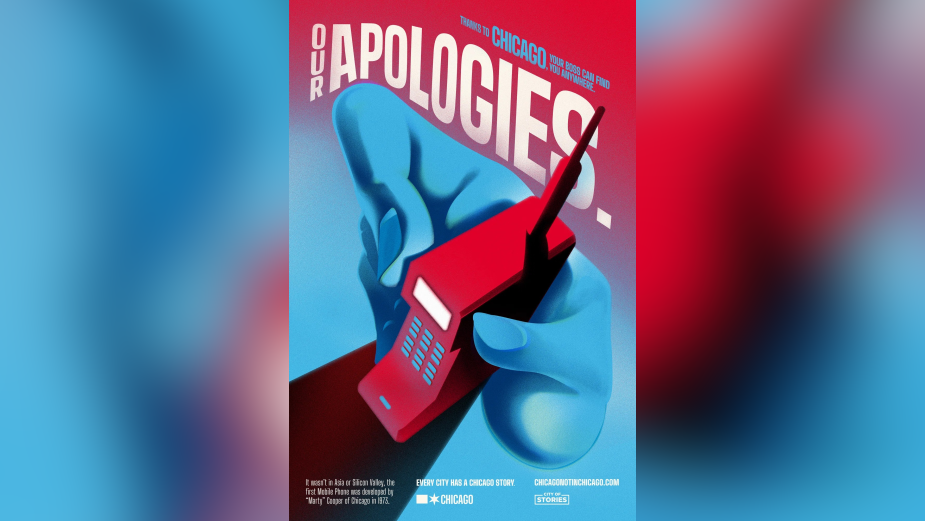 LBB> How was the wider ‘Chicago Not in Chicago’ campaign concepted? Did you approach the City Hall with the idea? How did it become the full multi-aspect campaign it is now?

Energy BBDO> We were invited by the chief marketing officer of the City of Chicago, Michael Fassnacht, to participate in a pitch to advertise the city’s new master brand platform ‘Chicago. City of Stories’. One of the ideas we pitched was ‘Chicago Not In Chicago’ and they liked it right away. Instead of telling Chicago stories in Chicago, we’ve decided to show that our stories go way beyond our borders. As the main concept was sold, the other pieces came naturally. New York is the first stop. The second one is going to be London. The campaign shows the influence the city has had on other places around the world, like Berlin, São Paulo, Dubai, Tokyo and Melbourne.

LBB> Where did the initial ideas for the posters and illustrations come from? Where will they be displayed? And was this an idea from the start of the Chicago Tour campaign?

Energy BBDO> When we landed on the idea of showing Chicago stories in other cities, we realised that having posters/billboards next to the Chicago contributions in New York would make the idea better and bigger. So, they will be displayed in NYC, of course, and have been displayed since the beginning in Chicago, too, as a way to show Chicagoans how many incredible things this city has provided to the world. Believe it or not, a huge part of the city didn’t know Chicago had created all of these amazing things.

LBB> When did Black Madre involved? And why were they a good fit for this campaign?

Energy BBDO> As soon as we got the layouts approved by the clients, we involved Black Madre. We’ve been trying to work with them for years and finally, we had the opportunity. We chose them because of the quality of their work. Black Madre is a world-class studio, they’ve done incredible things for brands and agencies all over the world, so that was an easy choice. We sent them the Chicago contributions we wanted to talk about and many design references, but we also gave them 100% freedom to come up with their own ideas. Luckily, agency and studio were on the same page. The final result is exactly what we had in mind. 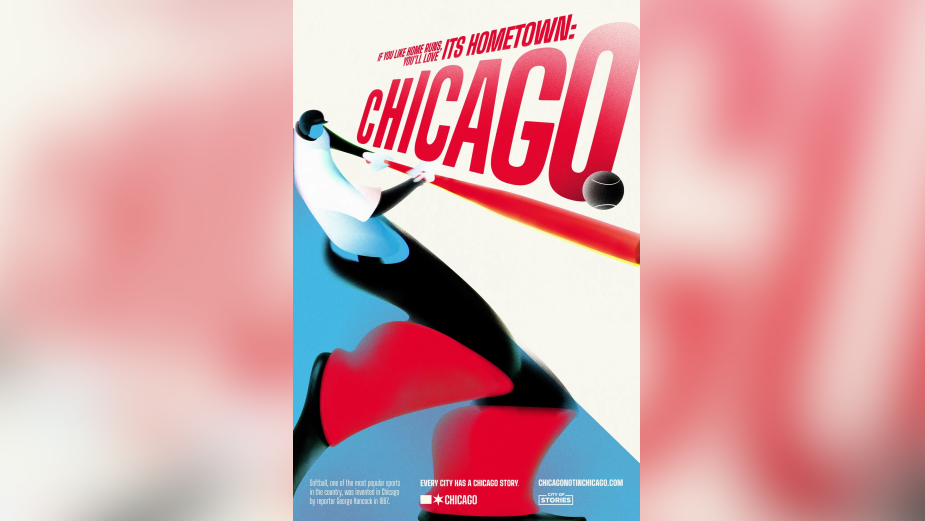 LBB> Where did the initial ideas for the posters and illustrations come from?

Energy BBDO> The truth is: the Chicago flag is beautiful, it’s a design piece per se. As a plus, Chicagoans are very proud of this symbol. So, using the colours of the flag and the star as our starting point was something natural, the right thing to do. If you look at the posters, there’s part of the star tip in each of them.

André> Energy BBDO brought the whole concept, presented the colour palette, the idea of ​​inserting the star and the objects to be illustrated. Then we interpreted the general idea and translated it into the illustrations. The Chicago aspects were chosen by the BBDO team. For the creation of the illustration, we had more freedom, but like everything else in this project, we felt that it was also a joint effort. The use we made of colours was in a sense of creating a sense of collection between the illustrations. Exploring the many uses of this limited colour palette (only four colours) to create variation between individual posters while also creating a connection when viewed all together.

The BBDO team was looking for something new for the aesthetics of the illustrations, something that, in a way, is different from our standard of production. But this was a challenge that we gladly accepted. Black Madre really enjoys creating new things and, in this case, we had a space to capture the central idea and unfold it in a way that aligns what they wanted to convey in a more daring and a little out of the way.

LBB> How much collaboration did you have with the Chicago City Hall team? How much creative freedom did you have and how is it creating for a city rather than a brand?

Energy BBDO> A lot of collaboration and trust from the entire team. As they liked the idea, we got a lot of creative freedom – of course, as long as we were on brand and under the platform ‘Chicago. City of Stories.’. Michael previously worked in advertising for many years and he can recognise when a good idea is in front of him and knows the best way to work with advertising agencies.

André> It's really very different to create a piece of communication for a whole city. The needs are different from when creating for a brand or for an individual, for example. The campaign has a lot of humour and I feel that people will enjoy seeing these images on the street. I feel like people won't regret stopping and looking at the art for a few seconds. The message is light and full of humour. 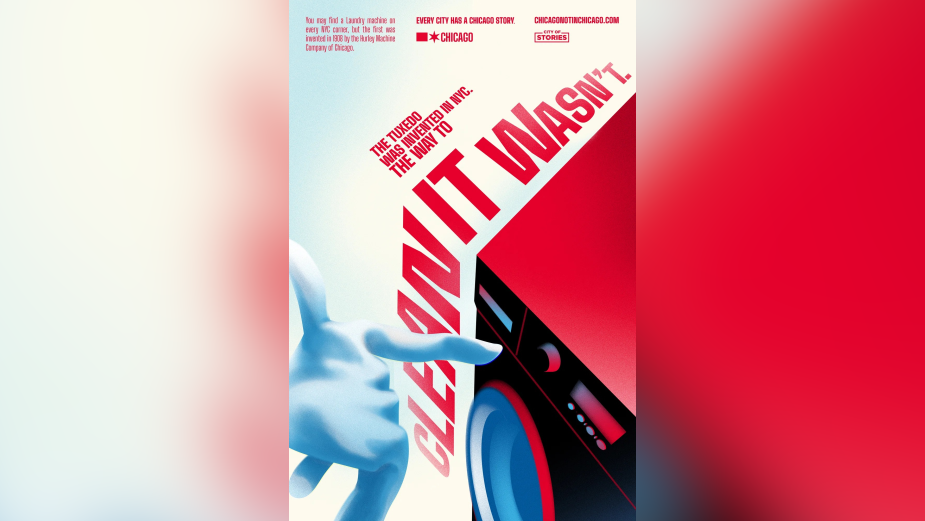 LBB> How long did the process take and where will the posters be displayed?

André> We had to dedicate some time to this project, as we needed to explore the various possibilities of visual resolutions, before getting to the starting point. Initially, we tried to fit the project into our usual production pattern, but after a while, it became clear that the need for this work was different. We should create something new, it took us around a month to create this, with that defined, the rest flowed very quickly and we finished it in two weeks.

They will be on the streets, on posters, on tour buses… Imagining the posters spread around the city has had a lot of influence, as it is a means of direct contact with people. We wanted to do things that would draw attention and cause sensations, stir emotion.

LBB> What was your initial reaction to seeing the illustrations for the first time? And do you have a favourite poster?

Energy BBDO> We loved them since the beginning but there was some back-and-forth, of course. That’s the process. It took us some time to land on the right style, and we really wanted the star tip to be part of each poster. As soon as we got there, everything went smoother. As we said, Black Madre is a world-class studio. They know what they do. Because we are fans of Frankie Knuckles, our favourite is the House Music poster. We also like the one about the American Cinema Industry. People have no idea that Hollywood actually started in Chicago.

André> The poster we like the most is one that talks about the invention of the coffee machine. We were already well into the project and still hadn't arrived at an aesthetic that met our expectations. This poster was sent in the middle of the project, as a variant version and ended up being the seed that created the aesthetics of the others.

LBB> Seeing all of these aspects of Chicago and the city’s contributions to America and the world being celebrated must make you proud. What does this campaign mean to Energy BBDO, as a Chicago-based agency?

Energy BBDO> As a Chicago-based agency, it feels great to share a little bit about the city with the World. Especially an incredible story like this one. We want everyone to see Chicago as it is – one of the world’s most important cities. As an example, our creative director Ricardo Salgado would call out the first time he came to Chicago, when he saw the skyline in downtown, his sentiment was: “Why isn’t the entire world talking about this city right now?” And when he moved to Chicago a year later and started learning about its history and contributions - its architecture, music, food, The Great Fire, The World’s Columbus Exposition, and many other things – he got even more impressed by the city. So, he is very proud of being a part of this campaign. Separately, did you know Walt Disney’s father worked on The World’s Columbus Exposition? And years later Walt Disney created Epcot’s World Showcase based on the fair? Chicago is incredible and it’s everywhere. 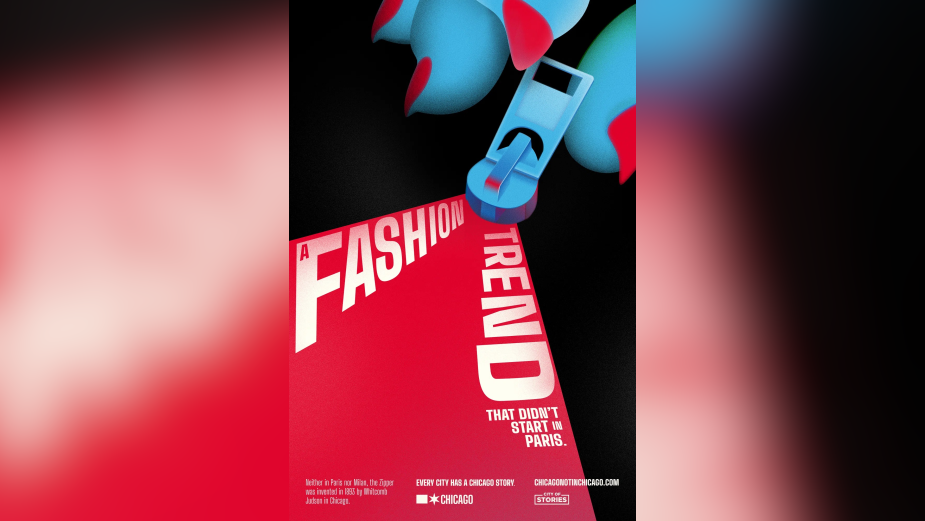 LBB> What was the most difficult challenge of this project and how did you overcome it?

André> Undoubtedly creating something new and at the same time capturing people's interest. As it is a city campaign, it is very easy to fall into something institutional, predictable. And the impression we had was that, if it were that way, people wouldn't give much importance to the play and the message it conveyed.

Energy BBDO> Definitely the shooting day in New York. Many on the team had never shot on a moving set before. It’s hard. We didn’t have control over almost anything. One wrong shot and you have to wait until the next lap to capture everything again. And all of this in the middle of the NYC traffic – you don’t know if the next lap is going to happen one hour or three hours later, how the lights are going to be, the noises, etc. Luckily, we had an amazing internal production team from Energy BBDO and Flare and the results have been amazing.

André> It was an amazing project, full of humour and creative energy. We thank BBDO for the opportunity and its team of designers for their collaboration. It was a pleasure to work with such creative and talented people. And of course, thanks to the city of Chicago, who brought to the world all these amazing things that posters present. 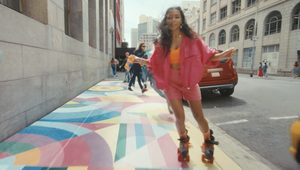 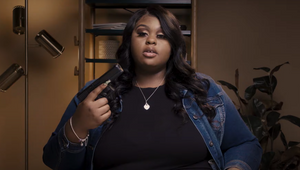 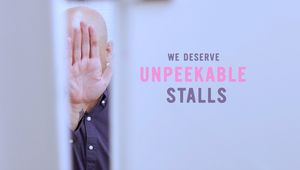 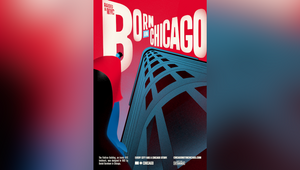