How 'The Lorem Ipsum Project' Can Improve Client-Creative Relationships 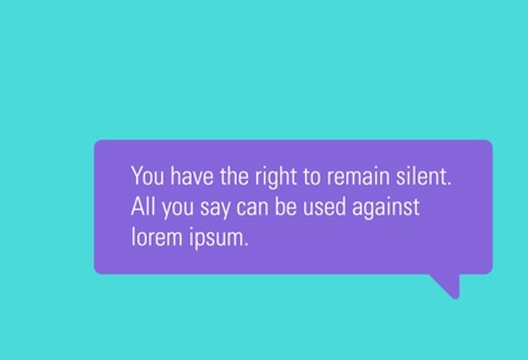 “Club de Creativos” (Spanish Art Directors’ Club) presents The Lorem Ipsum Project, an initiative created by VCCP Spain and produced by InTacto. The project is designed to encourage creatives to further improve the relationship with advertisers using a device that hasn’t been explored before – an updated version of the Lorem Ipsum text, featured in print mock-ups presented to clients.

The Lorem Ipsum Project has been designed in two ways, giving creatives the choice to either:

- Use a new default version of the famous Lorem Ipsum text that includes a request for care and respect for the work presented. This text can be easily copied from the website by art directors and designers and pasted into their mock-ups.

- Or alternatively, encrypt a secret message in the conventional Lorem Ipsum text in order to create a playful sense of mystery and further encourage involvement between creatives and advertisers. Specific characters are marked in bold within the text to help the advertiser discover the creatives’ secret message.

Beto Nahmad (Executive Creative Director of VCCP Spain) and Andrea Schifitto (General Director of InTacto Europe) officially presented the project in Seville during Día A (13 and 14 November) - a day conceived by C de C to give creatives and advertisers the opportunity to connect. Día C, which will be held next March in Pamplona and is solely for creatives, will include a display of some of the best encrypted messages uploaded by creatives and stored in the project’s online gallery.

The Lorem Ipsum Project is an international initiative, and at the time of launch the website has options in Spanish, English, French, Portuguese, Italian and German. Further languages will continue to be added on an on-going basis.

Carlos Holemans, president of the Club de Creativos (Spanish Art Directors’ Club), says: “The project arose as an extension of the communications campaign for the sixth edition of Día A and continues to work on the main objective of this day since it began: to enhance the relationship between creative and advertisers.

In the C de C we have always believed that a better mutual understanding between creatives and advertisers has a direct impact on the quality of work," adds Holemans. "The Lorem Ipsum Project promotes contact and does so with humour, an element which always improves and helps the relationship."