Trends and Insight 336 Add to collection 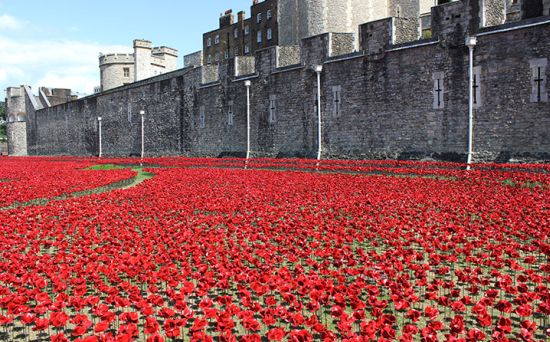 Over the past couple of weeks it’s been difficult to write about advertising and the like while wave after wave of human suffering and conflict mounts up. From the horrors in Gaza to the escalating ISIS crisis in Iraq and the shooting down of the MH17 flight in Ukraine, it’s hard to shake the feeling that the world is in a bad shape. It can be difficult to tune all that out and focus on what I’m supposed to be doing. If I’m being really honest, there have been times when the world of art and advertising and creativity have looked futile in the face of so much violence.  But this week I’ve had my faith somewhat rejuvenated by the creative commemorations for the centenary of the Great War. Creativity gives us hope, it challenges, it keeps memories alive.

While historians shoulder the responsibility for archiving and documenting facts, figures and stories, preserving the memories of the past for future generations, artists and creatives function more like emotional archivists, bringing visceral immediacy to tragedies and triumphs long past. And for WW1, that’s as true today as it was for the war poets like Siegfried Sassoon and Wilfred Owens. I will always remember the first time I heard Dulce et Decorum Est – that hard, painful knot in my throat, a physical reaction to the eloquently invoked horror.

Of course creative people and their talents are also exploited in the name of propaganda, whether it’s triumphalist war-mongering, whitewashing or just sheer manipulation of public opinion. However these projects for the remembrance of WW1 are about commemoration, not celebration. All of these projects that I’ve chosen are those which I think emphasise the human cost of war and forge a truly emotional connect. I can’t help but wonder, sadly, about how artists and creatives of the future will look back at the tragedies of the early 21st century.

This print campaign for the British Legion Poppy Foundation does a brilliant job of conveying the fact that WW1 touched all walks of life and that the trenches were full of all manner of people who had their own identities, careers, families before they became simply ‘soldiers’. It’s also interesting, psychologically. By using famous names, the ad causes momentary confusion and forces the reader to untangle the meaning of the ad.

Sometimes words and numbers just aren’t enough. Call it cognitive overload, but when you start to think in the hundreds of thousands things just start to blur. We just can’t visualise or process what it really means. Artist Paul Cummins has created a haunting but stunning visual metaphor that simply transformed the way I understand WW1. Along with a team of volunteers he created 888,246 ceramic poppies for a magnificent installation at the Tower of London, which will be completed on Rememberance Day. One poppy for every British military death. The effect Blood Swept Lands and Seas of Red had on me wasn’t an intellectual one, it was an emotional one.

Ogilvy Brussels has been calling on people around the world to create a digital, global field of poppies. Every ‘poppy’ planted is tied to one of the millions killed in the Great War, demonstrating the sheer scale of the Great War as well as connecting participants to the real people who lost their lives.

Last year DDB Paris made the story of the First World War personal and contemporary by creating a fictional social media account. The campaign for the Musée de la Grande Guerre du Pays de Meaux was created to help connect with younger people and ensure that the memories of the War live on among the digital generation.

Japanese artist Ryoji Ikeda has turned the spotlight on those soldiers who died but whose bodies were never identified with a dramatic light installation in central London. As the city turned off its lights, one huge beam shone from the Tomb of the Unknown Soldier. He also created a grid of searchlights at Victoria Tower Gardens and an eerie soundtrack which changes as people walk around it, for a truly ethereal experience.

Flight of the Stories

A couple of weeks ago we spoke to Johnny Fearless ECD Paul Domenet about their project for the Imperial War Museum, which involved them combing through original recordings of WW1 soldiers speaking and letters to tease out real stories and bring them to life.