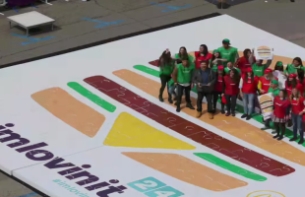 McDonald's launched a major global campaign - imlovinit24 -  aimed at bringing the world together virtually on March 24th through 24 gifts of joy in 24 cities in 24 hours.

On the day of the event, there were almost 40,000 total #imlovinit mentions, which is 850X more than the daily average, and the campaign was trending globally on Facebook and Twitter – this was actually the first time McDonald’s hit top ten worldwide conversation volume on Twitter.

It was a true agency collaboration - with TBWA playing the lead orchestration role, and working in close conjunction with McDonald’s roster of agencies – including TBWA, OMD, Leo Burnett, DDB, Cossette and Ruder Finn – to align on strategy and activation, and maximize impact on the ground and across all social channels, married with numerous local agency partnerships in the various global markets