How on earth do you 3D print a radio ad? Leo Burnett Melbourne gets experimental for BYO Cup Day 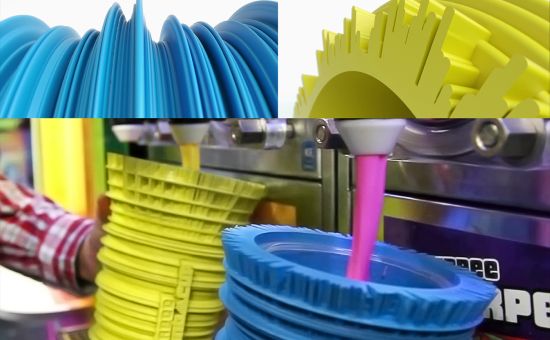 Slurpee BYO Cup Day, the day fans can bring in any item they want to use as a makeshift Slurpee cup, has always been about pushing people’s creativity.

To announce the event this year, Slurpee and Leo Burnett Melbourne set out to create cups out of the seemingly impossible: sound.

The process began with recording three radio ads for this year’s BYO Cup Day, each with a voice-over and distinct soundscape in the background: a Viking opera, a football stadium full of cheering fans, and the mating calls of two ‘frisky’ whales.

Using a suite of digital 3D modeling tools, the soundwaves from the radio ads were vectorised to create the shapes of the cups. The voice-over determined the circumference of the cups’ rims, while the peaks and troughs of the sound effects created each cup’s unique height and body shape, before all the soundwaves were meshed together.

“Slurpee BYO Cup Day is now an event where fans are the creators and they prove their ingenuity every year,” says Leo Burnett ECD Jason Williams. “Sound Cup is just another way to stimulate their imaginations and inspire cup creativity.”

Fans could download the 3D file and print a Sound Cup themselves, or win one on Slurpee’s Facebook page to drink, for the first time ever, out of cups made of sound for BYO Cup Day.