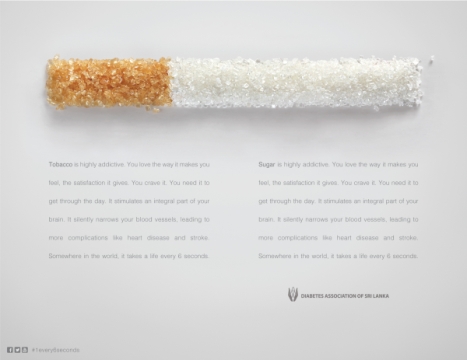 The overconsumption of sugar is fast becoming one of the world’s biggest problems, threatening millions of lives as one of the primary causes of diabetes. But does the public really understand how serious the threat is? Here’s a fact that may put things in perspective: diabetes kills the same number of people as tobacco does.

This year, the Diabetes Association of Sri Lanka (DASL) in collaboration with Saatchi & Saatchi Sri Lanka focused on this alarming reality. The 1 Every 6 Seconds campaign was unveiled across a number of media platforms on World Diabetes Day (November 14th) using a “sugarette” (cigarette made out of sugar) as a visual double entendre to symbolise the campaign. 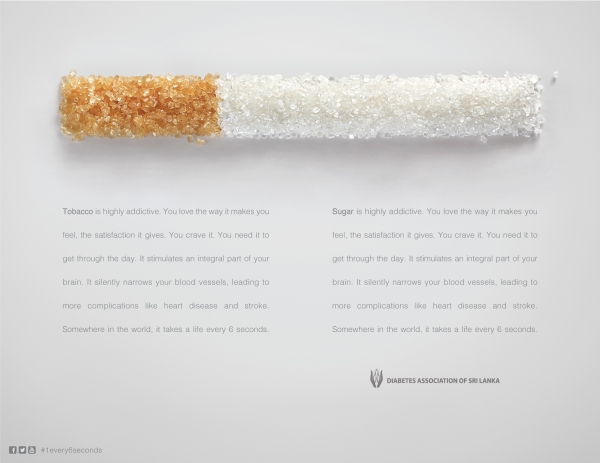 This clever representation of the problem not only turned heads in national press, but drew the likes of expert industry and medical professionals from around the world because of its universal simplicity. Naturally, the campaign made its way to social media too, and was shared across multiple networks as a message of awareness using the hashtag #1every6seconds.

Dr. Mahen Wijesuriya, Secretary of DASL and Honorary Director of the National Diabetes Centre was also interviewed about the campaign on national TV several times where he urged the public to react to the diabetes threat the same way we react to tobacco.

“Diabetes is an insidious disease that’s becoming a very serious issue here,” said Dr. Wijesuriya. “The prevalence of diabetes in Sri Lanka is 10.3%, that’s 2.1 million people suffering from the disease. Every day, around the country, 100 people die of diabetes-related illnesses.”

Realising the need to support the momentum of the campaign, local councils also pledged their support by using public signboards to paste large posters of the “sugarette” around prominent locations in Sri Lanka’s capital.

“Tobacco is always the one that gets the attention,” explains Carlos Anuncibay, ECD at Saatchi & Saatchi Sri Lanka. “What’s frightening is that diabetes is just as harmful and addictive, and we are completely oblivious to this. There is no cure for diabetes, you can only prevent it or control it. That is why we are pushing for awareness on all platforms.”