How Range Rover Battled the Dragon in China

Behind the Work 3.6k Add to collection 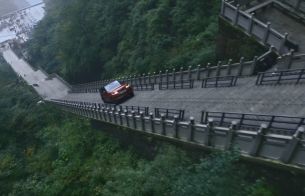 99 twisting turns alongside sheer vertical drops, racing along a road the locals liken to a white dragon. 999 steps up a 45-degree stone staircase leading up to an uncanny geological anomaly that resembles a gateway to heaven. The launch film for the new Range Rover Sport plug-in hybrid SUV features a challenge of both dizzying technical difficulty and mythic beauty.

The campaign from agency Spark44 is the latest in their series of ‘Driven Challenges’ for Jaguar Land Rover Group – and the Dragon Challenge is the toughest yet. The film sees 2017 Le Mans 24-hour class winner Ho-Pin Tung tackle the twisted road and intimidating stairway of China’s Tianmen Mountain.

According to Creative Director Martin Cox, the starting point for this challenge, which looks like a Chinese painting come to life, was pretty prosaic. They were looking for something that would demonstrate the technical prowess of the vehicle – its speed, ability to take corners, instant torque, low speed control.

“We started looking all over the world trying to find that, came across the road and thought that in itself looked pretty amazing and then discovered that the steps were at the top of it. Which kind of seemed perfect in a potentially terrifying way,” recalls Martin, who’s sitting with his colleague Michael De Vries, the agency’s executive producer.

Even better – and a happy coincidence – was Tianmen Mountain’s Chinese location. The country is a huge growth market for JLR Group. But for Michael, the real excitement came as the team began to uncover the local legends surrounding the holy mountain – they were looking for a challenge and what they found was a story.

“You find the road and the steps and then, as you unwrap more and more about the location, the memories and the characters, it gets more exciting,” says Michael.

Having found their challenge, they then had to make it a reality. With safety and feasibility a huge concern, the agency and the JLR team entered into an intensive testing phase. They created a 50-step replica of the staircase in the UK – and as well as being a vital technical and safety check, the tests were also full of useful insights for the engineering team.

Meanwhile, on the production side of things, there were many moving parts. Michael headed out to China to work with the park, who, he says were really supportive of the project. RSA Asia were the production service company and JLR Group’s Shanghai team helped hook them up with a government fixer who could smooth the path with relevant permissions.

Instead of a traditional car ad director, the team opted to work with Carnage's Sam Brown. That’s because they knew that to capture and keep the attention of both petrol heads and non-petrol heads alike, they’d have to build a human, visually exciting story.

“Sam to my mind, to everybody’s mind, is one of the top three directors in the country,” says Martin. “The car doing its thing would be great but we had to wrap a story in it and to keep people’s interest for six minutes you’ve got to find a way of making that entertaining. So, he was number one choice from the start.”

And where Sam really came in was demonstrating the scale and sheer vertiginous gradient of the challenge.

“Sam identified the big challenge early on, and it’s one that we took for granted, it was that you have to be able to show the steepness,” explains Martin. “Film and photography flatten everything out. You’d be really surprised. So he was really careful about making sure everything looked really steep on camera, making sure that every angle was thought out, to really make it clear to people that this was an unfeasibly steep thing we were doing.”

Working in tandem with Sam was fellow director Tom Barbor-Might, who spent time with local people to coax out their reactions to the challenge and to uncover the stories and memories that surround Tianmen.

So after all that planning, the team touched down in late October. Despite the research they’d done, they were still blown away by the intimidating scale.

“The combination of the road being so vertiginous, so steep in a short distance – it’s not like an alpine road where the car meanders its way up,” says Martin. “Every single corner was a huge drop off to the side so there was no room for error at all. We were going up in buses and vans and that was terrifying, even more so when you realised the driver would be coming up at speed… and that was before we even got to the steps. The steps were bigger and higher and steeper than I’d really imagined. That was the whole point of why we were there, why we wanted to do it, we wanted it to be bigger and braver but it was the scariest thing I’ve ever done.”

And despite the military planning, there was still so much outside of the team’s control – right up until Ho-Pin Tung completed the ascent the whole team was on tenterhooks. For one thing, they were operating under the gaze of hundreds of tourists – Tianmen attracts tens of thousands of visitors a day. So there were plenty of smartphones out, putting the team under even more pressure.

To make matters even more nerve-wracking, the bottom steps of the staircase were damp and the rolling morning mist that shrouded the mountain threatened visibility. All factors which risked calling off the stunt altogether. “It was a fine shout whether to go or not because we just had that one day to do it,” says Michael. “We waited a little bit and in the end we got it right.”

In the end, the fog adds to the aesthetic and drama of the film – but it made things really scary for Martin. He was perched up the top of the staircase with Tom, to interview the driver when he reached the top. However, without a monitor and cloaked in mist they had no way to see the progress the car was making – until it nosed its way over the top step.

With the film in the can, the next task was to edit together the show-stopping central film as well as the many other assets that run alongside the campaign, including a plethora of behind-the-scenes films and social media cutdowns. The Spark44 team are full of praise for Big Buoy editor Colin Sumsion, who really ratcheted up the tension for the main film, as well as the editors who had the tricky job of the social cutdowns and films, Nick Southwell (Spark44) and Justin Addleton (Cool Hand Productions).

With the campaign now out – the launch coincides rather nicely with Chinese New Year – Spark44 are already exploring their next challenge. “We’ve started already on the next launch. As with all these things they take some time to come to fruition but it will be something quite extraordinary to beat that one,” says Martin.

“Can’t wait for the next one,” rejoins EP Michael, perhaps anticipating the production challenge that raising the bar will bring. “You write it, I’ll make it.”