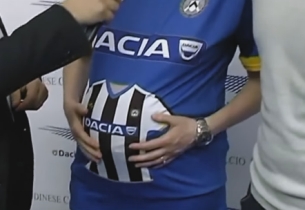 Renault's low-cost brand Dacia has been the main sponsor of the Udinese Football Club since 2008. Now, after eight years, the brand has given its name to the new Udinese stadium, The Dacia Arena.

The problem is that the Italian stadiums are gradually emptying, due to the laws that keep the ultra-fans (and football hooligans) out.

The Dacia Family Project was an online contest that convinced Udinese supporters to create a new generation of football fans. How? By giving away season tickets to future supporters while they're still in the womb!

For the first time in the Italian Championship, during the Udinese-Napoli game, almost 150 pregnant women populated the stadium and 20 of them lined up with the football players, wearing a special shirt.